While the results were a bit slower in coming in 2017 – one podium at Argentina and six additional top fives – Crutchlow was awarded a two-year extension of his contract and promoted to a full Honda Racing Corporation factory rider alongside the mercurial Marc Marquez and Dani Pedrosa. And the 31-year-old has been hard at work ever since. Coming off a winter spent in Southern California and an encouraging three-day test at the Sepang circuit in Malaysia, Crutchlow, now poised to begin his eighth MotoGP season as a member of the LCR Honda CASTROL team is as excited to go racing as he’s ever been.

Q: Valentino Rossi has recently talked about how important it is to come into a new season as highly motivated as possible. Does that make sense to you?

CAL CRUTCHLOW: Yeah, definitely. He’s been at it a lot longer than me, I remember watching him on TV when I was a kid. Seeing him wanting to continue in racing gives us all motivation to want to be better and try and challenge as well. He has definitely set the bar high. With regards to me, yes, you have to be motivated in these [pre-season] tests to have a good season. Sure, sometimes you don’t have a great test, but that doesn’t mean you’re not motivated. I’m looking forward to this season. I think it’s going to be a good year.

Q: The first test at Sepang appeared to go well – after three days of testing, you stopped the clocks at third-fastest. Was that encouraging?

CC: Yeah, we had a good test. There is no doubt about that. I was excited to ride the motorcycle and I did a lot of laps over the three days. We had a really, really busy testing session. We were good with speed and we were good with the bike. Honda definitely went away and tried to do what we had asked from last year, and that was to make the engine stronger, and they seem to have done that. Until you race against your competitors, you never know. But from my feeling off the bike, I feel that it is stronger than last year and maybe a little bit more manageable. We’re really pleased with what HRC and the Japanese technicians have done over the winter in Japan.

Q: You were drafted into the Honda Racing Corporation factory team for 2018 and beyond. Although you’re on different teams, do you and fellow Honda factory riders Marc Marquez and Dani Pedrosa talk?

CC: Yeah, yeah, we definitely talk. I think last year a few times I helped Marc to some extent with regards to the bike. I won’t say I went up to him and started speaking to him about it, but we always speak. With Dani, it’s a little bit different situation. He’s got his own style and his own way of working, but in the end, we all seem to end up in the same direction, which is always good. I’ve been able to evaluate things – parts, different configurations, maybe electronics – and I can do that quite fast and I get a good understanding and feeling for all of it very, very fast, where some other guys may spend the whole day on it.

That works well with the development of Honda, but I’m not just a test rider, I’m a racer as well. Obviously, I do test some of the parts, but there are parts that I don’t see either, but we always seem to get the job done. Last year Marc won the title and Dani won a couple of races and it was a strong performance from Honda last year. That should be improved this year from the feedback that we’ve given in the past year. 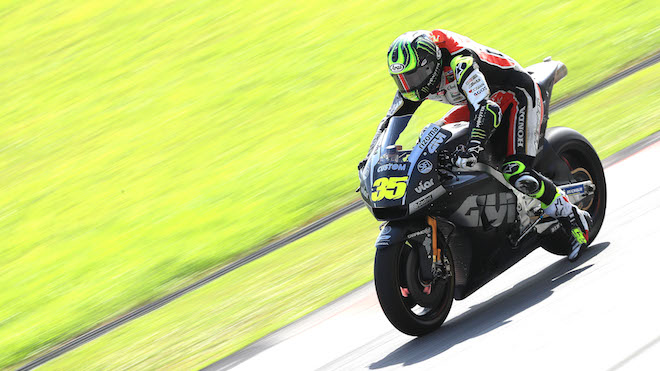 Q: How did you feel about your 2017 MotoGP season? You’ve said elsewhere that you thought it was “average”.

CC: I set the bar so high the year before, in 2016, with a lot of podiums and a couple of wins, and I wanted to repeat that in 2017, but it just never fell in my favor. It was as simple as that. I thought Argentina might have been a race I could have won, but we had some issue and I was happy to finish third, to be honest. I also wanted to win in Australia, but I never got a great start, and everyone managed to get away, and I ended up with a fifth place. I had a string of fourths and fifths, which could have easily been podium finishes, but we never made it happen for one reason or another. I still think we did a good season. For what we had under us, I do think we had a good season, but in comparison to the year before, of course I would call 2017 average. The plan is now is to not make this one average.

Q: You consider yourself to be an ‘observer’. What do you mean by that?

CC: I see things that… I’m not saying that other people don’t see them too, but I can spot something that somebody else can’t see so fast. I don’t understand why. I just manage to pick things up very, very fast. I always, always argue with the team or Michelin in regards to what tire somebody is using because I’ve seen it with my own eyes or have spotted it in a video or something like that, and they will say, “No, no, that didn’t happen.” Then I’ll always go back to a video and say, “Look, there it is. There you go.” I don’t know why, but I think in my game, it’s a very, very positive thing to have. Does it make me any faster on the bike? I don’t really think so. It just makes me aware of things going on around me.

Q: You’re renowned for your work ethic and determination to excel. But you’ve said in the past that you don’t feel that you’re as naturally talented as some of the other riders you line up against. Is that true?

CC: Yeah, I still think I’m not as naturally talented as some of the guys. I can’t do exactly what they can on a motorcycle week-in and week-out. I can’t ride a motocross bike. I’m no good on a motocross bike, but I also don’t really care to be. If I do go ride a motocross bike or a flat track bike or something that some of these guys train on, it doesn’t make me any faster on the track at all. I know it doesn’t. I’ve tried it. Some of the guys are fantastic at doing that, and they’re also good in MotoGP, so I’m definitely not as naturally talented on a motorcycle, but that doesn’t mean that I can’t be competitive, because it will probably be my determination that will bring me through.