Scott Dixon was encouraged by his first experience with IndyCar’s prototype windscreen after completing the first of three scheduled test runs at Phoenix on Thursday.

Dixon completed half a dozen laps in the initial run, which was intended to test the 0.4-inch thick windscreen’s performance in bright light. The second and third runs will be carried out later today at dusk, and then in darkness.

“No show-stoppers,” said Dixon after climbing from the car. “It’s a little bit different, looking through something that is so thick. I thought it would have messed with distortion a lot more, but there’s nothing like that; no problems with reflection.
Obviously we’ll run a little bit later to see how it is in a more dusk setting, and then again tonight. But the weirdest thing is just how quiet it is – you don’t have any buffeting; the car is very smooth, like you’ve gone to a really luxurious, dampened car.

“We’ll need some cooling, because you get no airflow through the car. But kudos to IndyCar. There are definitely things we can improve on, but [they’ve done a good job, and hopefully we’ll find some more things tonight.”

The prototype incorporates several design changes that arouse during simulator testing, in particular the extension of the side of the windscreen along the full length of the cockpit. This, Dixon said, appears to have eliminated the field of vision problems that had been a source of potential concern.

“Early on there was more of that, where the screen stopped short and your peripheral vision sort of went through it,” he said. “I think for some of the guys in the sim that was a little bit of an issue – when you’re trying to get close to walls, you couldn’t really feel how wide the car was or where you were. But obviously they extended that, and made provisions to fix that issue. You’re looking through quite a substantial piece of material, and it just takes your eyes a bit of time to adjust to how you look through it.”

Reflection was also a non-issue, with Dixon suggesting that the screen actually helped to reduce glare that was normally created by the visor and tear-offs. But many of the question marks over the viability of the device can only be answered with more testing. One that Dixon raised following his initial run was whether distortion will continue to be a non-factor when the windscreen is tested on a road or street course.

“I think it will be interesting on a road and street course, just with the perception of the corner and seeing how you’re coming into it, and seeing if there’s issues if you’re looking through finer gradients of where you visually look through [the corner],” he said. “But nothing yet.” 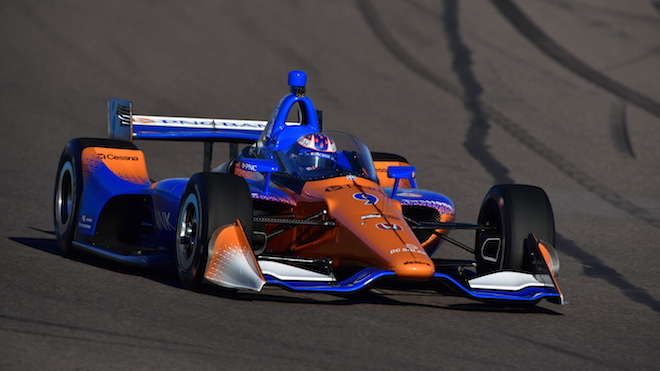