“Having both Maxime and Andy join us for the SprintX races this season shows just how committed Bentley Motorsports is to our program this year,” K-PAX Racing Program Manager Darren Law said. “It is always beneficial to have factory drivers join the team. Both of them have a lot of seat-time in these cars.

“They know the feel of the cars and what has worked or not worked for them regarding setups. So, being able to interact with our engineers and drivers will give us additional insight. Pairing them with Alvaro and Rodrigo is going to make both cars solid contenders for wins.”

Soucek and Soulet joined Bentley in 2015 following the introductory season of the Continental GT3. Through three seasons the two have competed in the Blancpain GT Series, which has a similar format to PWC SprintX competition – a 60-minute time limit that features mandatory driver and tire changes.

In the series’ Endurance Cup, the two have finished inside the top three the last two seasons. Soucek, who will make his American sports car debut in 2018, said this season with K-PAX Racing will be “kind of interesting,” because it will be the first time he and Soulet will be competing in different Bentley racecars.
Like Parente, Soucek has only competed at one U.S. track prior to his rookie year in the series.

“I’m very excited to drive for K-PAX Racing – a very successful team that I’ve been following for years in America,” Soucek said. “I’m even more excited to be driving alongside a long-term friend and teammate like Álvaro Parente, who is a driver I respect a lot and someone I appreciate very much. He is extremely talented and will be a good benchmark.”

Before joining Bentley M-Sport, Soucek spent the early-years of his racing career in karting and open-wheel racing. From 2002-09, he competed in series such as the Spanish F3 Championship, World Series by Renault, GP2 Series, SuperLeague Formula and FIA Formula 2. Soucek won the Spanish F3 Championship and FIA F2 title in his final year with each series, and he became a Formula 1 test and reserve driver for Virgin Racing in 2010. The Spanish driver tested F1 machinery for Toyota and Williams before making his debut in GT racing in 2012.

“K-PAX Racing and Bentley have been very successful as a team and manufacturer in the past, so joining forces now can only bring positive results,” Soucek said. “From what I heard, the competition is slightly different to Europe but the level is very good. I’ll have to adapt to it quickly, but the team is already getting ready and I have no doubts they will do a great job. Álvaro has experience with both the team and the championship, and he is familiar with the race tracks. So, I will try to benefit from it.”

“K-PAX Racing has a great reputation, one that spans the Atlantic over into Europe, so I’m honored to be racing with them in the USA,” Soulet said. “Baptista has proven to be one of the Pirelli World Challenge young stars, and I’m excited to work with him at such a crucial stage in his career. I’m prepared to give him all of my knowledge of the Continental GT3, and I’m looking forward to having him nipping at my heels – having a hungry and energetic 21-year old in the team can certainly keep you on your toes.”

Soulet also comes from an extensive open-wheel racing background, having competed in various series like the French F4 Championship, Formula BMW USA and Formula Renault Belgium, which he was crowned champion in 2004. In 2011, Soulet won his first sports car titles in the Belcar Endurance and GT3 Championship, and since he has been a strong competitor in multiple series – including Blancpain GT.

“We are still working to bring a third Bentley Continental GT3 to PWC this season,” Law said. “We have just taken delivery of the car and are getting it prepared at the shop now. We have yet to fill that seat, but our goal is to have a customer program with this car for either the whole season or we can separate-out the Sprint and SprintX events.” 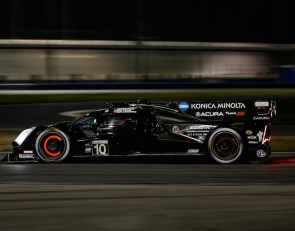 Wayne Taylor Racing teams up with Andretti Autosport in IMSA