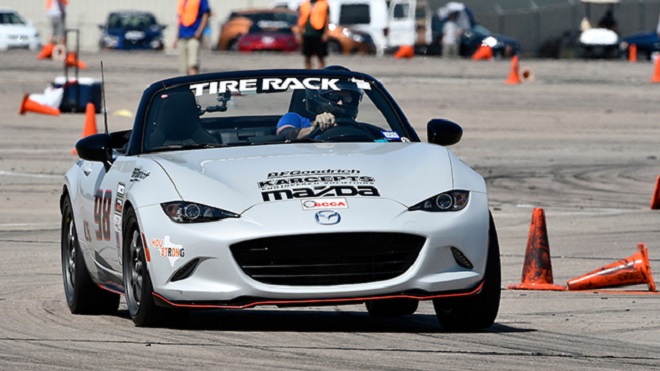 There may be a decent amount of National Champions across the spectrum of SCCA’s autocross classes, but there is only one SCCA Solo Driver of the Year – and for 2017, that honor befell Daniel McCelvey from the Houston Region. McCelvey won his second C Street title in a fourth-generation Miata, but his story doesn’t end there.

The SCCA Solo Driver of the Year, chosen by the Solo Events Board from nominations submitted by the membership at large, is awarded to the competitor who has demonstrated exceptional skill or has overcome major obstacles to produce an outstanding performance at the Tire Rack SCCA Solo National Championships. The award is presented at the SCCA National Convention, recently concluded in Las Vegas, Nev.

There are plenty of distractions during Solo Nationals. This year, one immense distraction impacted several competitors: Hurricane Harvey. The storm’s two-day rampage along the Gulf Coast displaced families and flooded homes of SCCA members, and almost kept McCelvey from making the trip to Lincoln, Neb. But with Harvey’s floodwaters receding from their home and a cleanup crew assembling, McCelvey’s wife, Laurie, convinced him to pack up and head to Lincoln Airpark. There, a tall task awaited in the C Street class, which had been condensed from the previous year and had more intense competition.