Squadra Corse Garage Italia Americas has announced its participation in the Pirelli World Challenge GT Series with a Ferrari 488 GT3. The team is the result of the collaboration between Lapo Elkann and Ronnie Vogel, underneath the umbrella of Garage Italia, the creative hub founded and directed by the Italian entrepreneur.

The car’s livery has been presented today in Fiorano, created by Garage Italia’s designers for the Squadra Corse Garage Italia Americas team. It is inspired by the Italian and the Mexican flags – reproduced on both sides – and it celebrates the bond between the two countries.

The car will participate in the SprintX division of the series and will be driven by 2016 PWC GTA series champion Martin Fuentes of Mexico City, Mexico, and sports car and NASCAR track competitor Caesar Bacarella of Parkland, Fla. Fuentes will also take part in the remaining races of the championship competing in GTA class. Swiss watchmaker Hublot, Alpha Prime and Italian Independent will be the team’s sponsors. 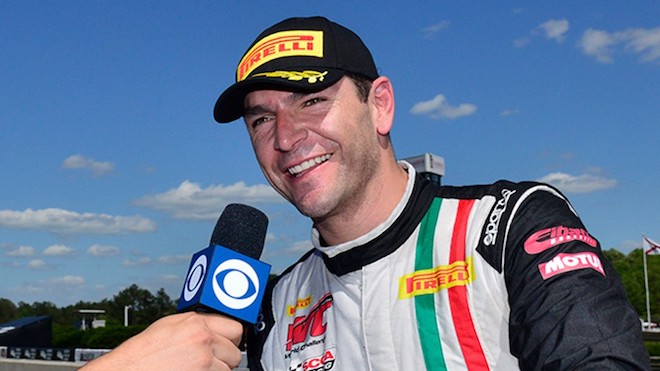 “I’m very excited to be part of this team in one of the world’s best GT championship in the world hand to hand with Squadra Corse Garage Italia Americas and Hublot racing with a car as special as only a Ferrari can be,” said Fuentes (pictured above). “Looking forward to a great season.”

“Getting on the track with Garage Italia’s team in the Pirelli World Challenge championship makes me extremely proud. Ronnie Vogel is, first of all, a good friend of mine and I am glad to start this adventure in the motorsport industry together with Squadra Corse Garage Italia Americas,” said Elkann, Garage Italia’s founder and Creative Director. “I do love challenges: my passion for competitions and speed has always been a part of my life and I am excited to the idea that a Ferrari with a livery branded by Garage Italia Style Center’s designers will run in such a prestigious championship! I am sure that drivers Martin Fuentes and Caesar Bacarella will hold the colors of Italy, Mexico and U.S.A. up high all over the world.”