The sight of Corvette Racing’s championship-winning C7.Rs all but helpless to vie for the win in Daytona was a strange two-day affair to witness at the Rolex 24.

Steeped with constant success over two decades of endurance racing at all the major events – Daytona, Le Mans, Sebring and Road Atlanta  – the six drivers who pilot the popular yellow coupes learned early on that the Rolex 24 in 2018 was going to be a celebration for the runaway Ford Chip Ganassi Racing GTs.

Corvette Racing program manager Doug Fehan says the team knew they were unlikely to visit Victory Lane which helped, in a small way, to reduce any frustration that was found with the visible performance imbalance.

“Based on our calculations of the [Balance of Performance] changes made after the Roar [Before the 24 test], the Fords should have been about six-tenths faster than us, which is about what we saw, so we knew they would be faster than everybody and knew what our performance window was,” Fehan told RACER.

Buckling in to try and execute a flawless race was the only hope Corvette Racing had, and the only counter to that plan would come from Ford. If both teams got to the end of 24 hours without major dramas, Ford would hold a clear upper hand. 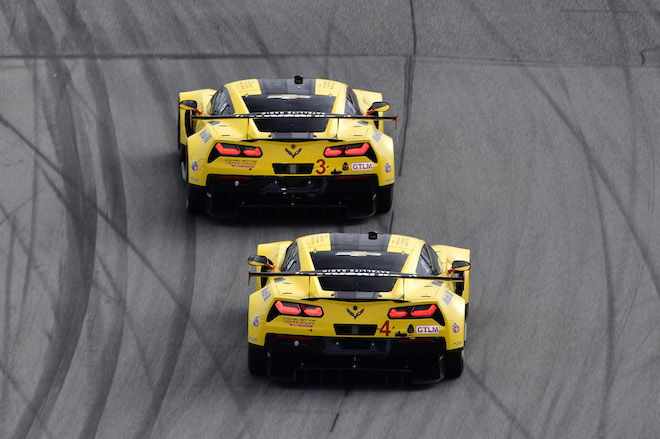 “There was no question,” Fehan continued. “But in the end, we knew, and history teaches us this, that they would have to run a perfect race. We’ve won this race more times being slower than we have being faster. Were we concerned about it? Of course. You’d always like to have the playing field to be even, we knew it wasn’t going to be even, but we also know what our capabilities are and what can happen.

“It’s 25 percent great car, 25 percent great team, and 50 percent good fortune. Plus, we knew weather couple play a role, but those are all the elements. We weren’t down. We’d been in that position many times before. As the race unfolded, it became more frustrating for us.”

Resigned to runner-up status, Corvette Racing focused on capturing as many points as possible and brought both C7.Rs home to take third and fourth, two laps down for the No.3 car and three for the No.4.

“We utilized pit strategy, utilized our drivers’ skills, but there weren’t many yellow flags, which limited our ability to stay close,” he said. “That worked, obviously, not in our favor. As it drew into the waning hours, it was pretty apparent, unless there was a catastrophic occurrence, that we were going to be racing for third and fourth, which we were fine with.

“We knew the hand we had been dealt, and we played it. I’m very proud of how perfect a race we ran with both cars. We worked our tails off to stay on that lead lap, but it became futile in the waning hours.”