When entrepreneur, sailor and auto racer Briggs Cunningham was granted two entries for the 1950 24 Hours of Le Mans, the easy option would have been to buy a couple of European-made sports cars. But Cunningham wanted his debut in the French endurance classic to be an all-American affair, instead acquiring a pair of Cadillac Series 61 Coupe de Villes and sowing the seeds for the legend of Le Monstre.

One car would race in near-standard spec, bar an extra fuel tank, additional brake cooling and twin carburetors, but the other took spectacular advantage of a rules loophole allowing custom bodywork to be fitted over a stock chassis. While the race organizers envisaged “custom” to mean minor changes, Cunningham had a fundamentally different take on it…

He wanted the Cadillac to be as fast as possible down Le Mans’ 3.7-mile Mulsanne Straight and called on Grumman Aircraft engineer Howard Weinman to do whatever it took. Refined in a Long Island wind tunnel normally used for crop dusters, Weinman’s roadster concept put function above form, obliterating any trace of what lay beneath. In profile, the vast slab of bodywork looked like an aircraft wing section; from any other angle, it was like nothing Le Mans had seen… 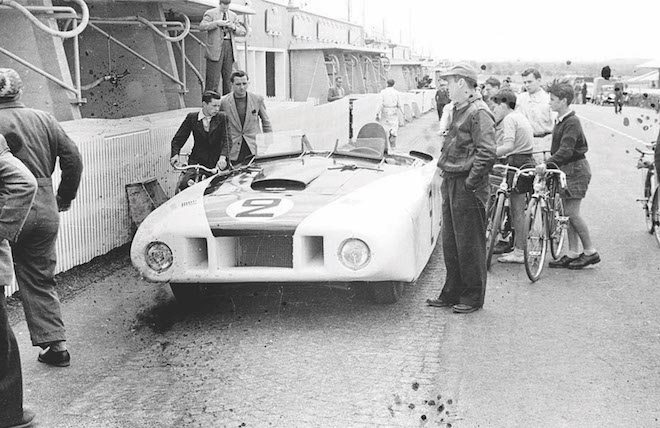 On its arrival in France, officials pored over the car for hours, finally conceding, albeit grudgingly, its legality. The brutal-looking racer was the center of attention, and when a fan noted with awe and horror, “C’est un monstre,” the name stuck.

Powered by Cadillac’s thundering, 331cu.in. (5.4-liter) V8, with a custom, five-carburetor layout, the 160hp Le Monstre was a 130mph terror on the Mulsanne – some 13mph faster than its stock stablemate – but suffered from poor traction out of the turns, making it slower around a full lap.

Sharing with fellow American Phil Walters, Cunningham started the race, but nearly ended it after just two laps when he ran off the road and into deep sand. His decision not to carry a shovel in the car proved costly, losing 30 minutes. That aside, Le Monstre ran faultlessly, climbing all the way back from 35th to finish 11th – one place behind the stock Cadillac – and earning the respect and affection of the crowd.

With the sun beginning to set on the Florida speedway, Taylor took four laps behind the wheel of the 67-year-old “prototype” when running ended at the last official IMSA test of 2017 and came away enthused and honored.

“Getting the chance to drive a car that raced in the 1950 Le Mans 24 Hours was super exciting,” Taylor said. “The car’s caretakers [from its current home at the Collier Collection] were giving me the download on the car a few hours prior to our drive on the track. I was trying to ask as many questions beforehand to be as prepared as possible.

“Once we got rolling, I almost had a moment as soon as we left the pits… I almost drove into the side of the ATS-V [Championship Edition, on hand for a photo shoot]! Besides trying to learn a three-speed column shift, I had to turn the steering wheel past 90 degrees to get it to turn. Combine that with the car weighing 3,700lb on skinny tires – it was a handful. The guys from the Collier Collection didn’t have any hesitation about the speeds we were going – it was amazing! 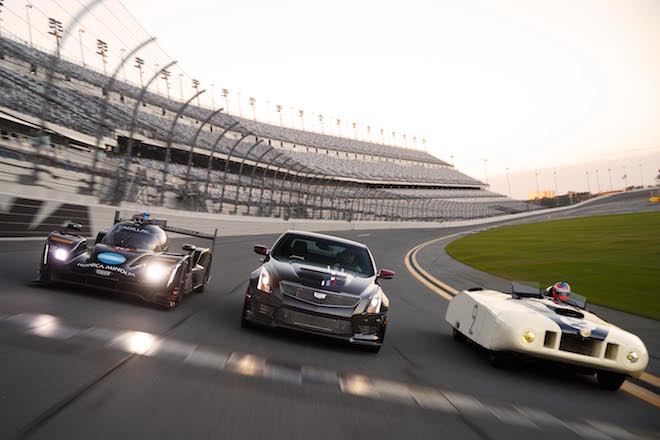 “On the first lap going into the Bus Stop, I went for the brake, and I’m not sure I’ve ever driven anything with full drum brakes before. When I got up high onto the banking, I looked left at the Cadillac DPi-V.R on the inside and felt like I was going to fall out of the car. The relative lack of safety back then, and lack of support around the driver were crazy feelings. You don’t get the sensation of how steep the Daytona banking is in the DPi-V.R at over 170 mph. I couldn’t imagine what it was like doing over 130mph down the Mulsanne, lap after lap for 24 hours. It was an amazing experience to be able to drive a car with such a great Cadillac history.”

Get the latest news on Cadillac’s 2018 race programs HERE and find out more on Cadillac’s road-ready, track-capable V-Series HERE.

And for more information on Le Monstre and its current home, The Collier Collection at The Revs Institute in Naples, Fla., click HERE.