Action Express Racing’s Joao Barbosa, Filipe Albuquerque and Christian Fittipaldi combined in a record-breaking performance to give Action Express Racing its third triumph in the Rolex 24 At Daytona – and its first in the No.5 Mustang Sampling Cadillac DPi-V.R in the opening event of the 2018 IMSA WeatherTech SportsCar Championship.

Barbosa took the lead under caution following a pit stop by Acura Team Penske driver Helio Castroneves on lap 516. The No.5 led the rest of the way, giving both Barbosa and Fittipaldi three overall victories in the event (Barbosa also holds a class triumph), while new regular season driver Albuquerque won for the first time.

But while the No.5 never relinquished the lead, the team struggled with overheating down the stretch – at one point making a brief visit to the garage under caution to take on water.

“I was looking all the time to the water temperature and oil temperature and it is flashing on and off at the same time, lighting up like a Christmas tree,” admitted Albuquerque, who lost the 2017 Rolex 24 overall victory on the final lap. “I was seeing the 31 and the 54 gaining laps and laps and I had to overtake the GT cars at the same time. It was really hard to manage. But in the end the Cadillac engine behaved very well and was able to handle the high temperatures for the win.”

Barbosa was part of the line-up when Action Express won its debut race in 2010, and joined Fittipaldi in winning the 2014 event – both in Corvette DPs. 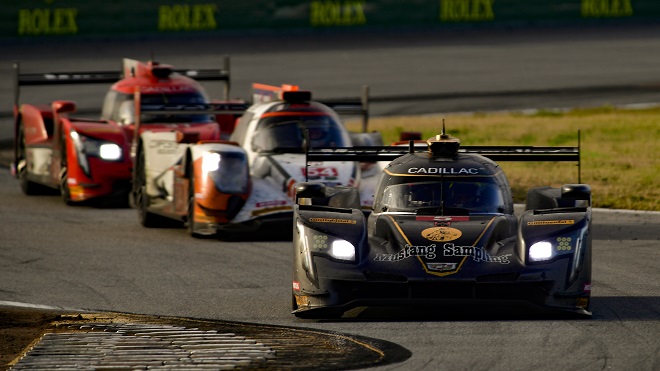 “It was not just the last hour, but the last six hours that we had to manage a lot of things inside the car,” Barbosa said. “The team did a tremendous job to manage things outside of the car. It is easier to really push than to drive slow and manage your pace. The Cadillac ran well and we made it to the finish. The team did a flawless job. With last year’s disappointment, we finally got one.”

Eric Curran, Felipe Nasr, Mike Conway and Stuart Middleton combined to give Action Express Racing a 1-2 finish, placing 1m10.544s back in the No.31 Whelen Engineering Cadillac. That car was also struggling with overheating issues, falling off the lead lap when it also went to the garage for a water charge under the green flag.

“We were behind our team cars for hours at a time, but we couldn’t seem to make up the time,” Curran said. “You can’t complain about a second-place finish in the Rolex 24, but it would be nice to go home with a watch.”

It was the second straight triumph for the Cadillac DPi-V.R, after Ricky and Jordan Taylor, Jeff Gordon and Max Angelelli won last year in the No.10 Konica Minolta entry.

Third, one lap behind, were Colin Braun, Jon Bennett, Spencer Pigot and Loic Duval in the No.54 CORE autosport ORECA 07-Gibson.

Two-time Formula 1 world champion Fernando Alonso’s sports car debut was promising but problematic. While he led the event in the early going, a series of mechanical issues relegated the No.23 United Autosports Ligier JSP217 co-driven by Lando Norris and Phil Hanson to 13th place in the Prototype class.

“It was a positive feeling despite the issues and reliability,” Alonso said. “It was a very nice experience, the whole event. The test, the qualifying, the restarts, the stints, the fatigue at night and then the transition from night today – that was one of my stints and it was very nice being on track at that time. I really enjoyed the traffic management and the car itself. And maybe the nicest thing was how competitive we felt; we entered the race without high hopes because we were never competitive and suddenly we picked up the pace and everyone was smiling in the garage. So that was a nice feeling.”

The race was slowed for caution only four times for minor incidents for 1h16m40s, contributing to the record pace. While the forecast heavy rain failed to arrive during the final hours of the race, there was a brief and surprise downpour during the early evening. The final six hours were run under the green flag. 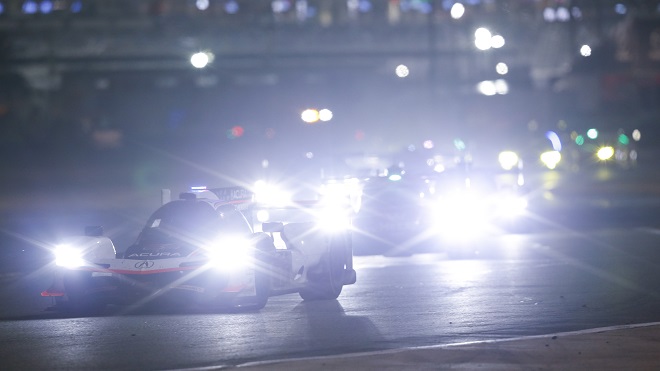 “We had a lot of tire failures, and we don’t know why, so it was not safe to do it anymore and keep going,” Taylor explained following his decision in the early morning hours. “Our pace was good, but the only thing that was holding us back was the tires. We’ll figure out why.”

Acura Team Penske had both of its Acura ARX-05s lead the race before falling back with problems. Juan Pablo Montoya, Dane Cameron and Simon Pagenaud led four times for 20 laps in the No.6, eventually finishing ninth, 15 laps down. Taking 10th, another 5.964 seconds back, was the No.7 of Castroneves, Ricky Taylor and Graham, which had a long stop after nighttime contact. The team led 19 times for 105 laps.

Other DPi teams experiencing difficulties leading to retirements were the two-car efforts by ESM Tequila Patron Nissan Onroak DPi and the debut of Mazda Team Joest RT-24P. The No.90 Spirit of Daytona Cadillac led twice in the early going before retiring with an engine misfire. 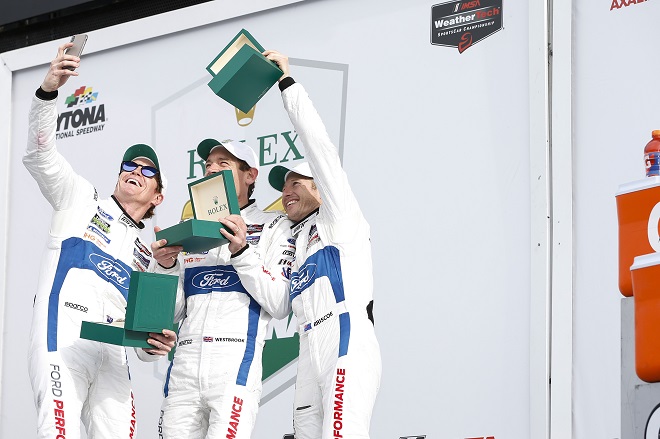 In GTLM, Ryan Briscoe, Richard Westbrook and Scott Dixon gave car owner and event grand marshal Chip Ganassi his 200th career triumph, with the team Ford GTs running 1-2 for much of the race.

“It was 24 hours of intense racing, and I’m proud to be part of it,” said Westbrook following his first Daytona victory in his 13th start. “It seemed like ages that we were one second apart. We made a race of it – it was cool.”

Corvette Racing took the next two positions. Pole winner Jan Magnussen, Antonio Garcia and Mike Rockenfeller were third in the No.3 Corvette C7.R, two laps down. Another lap back was the No.4 of Oliver Gavin, Tommy Milner and Marcel Fassler. 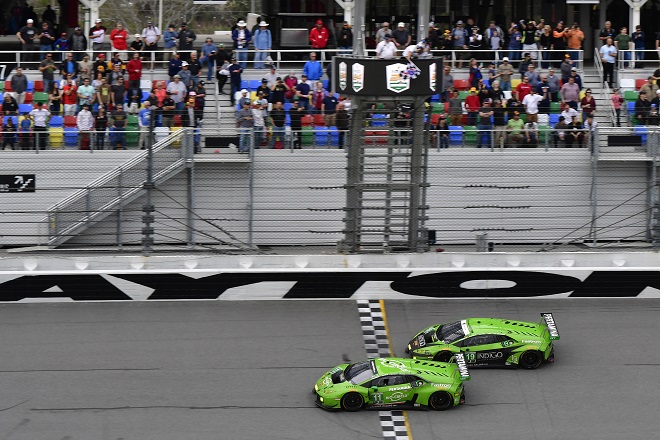 Next up for the WeatherTech Championship will be the Mobil 1 Twelve Hours of Sebring, set for Saturday, March 17.