Today would have been Paul Newman’s 93rd birthday.

A household name for his acting exploits, Newman has a special place in the motorsports community as a fellow racer. Newman won the GTS class of the 1995 Rolex 24 at Daytona – at age 70 – driving a Jack Roush Ford Mustang as a birthday present from his studio to celebrate his recent film, Nobody’s Fool.

Many of the drivers competing at Daytona this weekend have fond memories of Newman, a six-time competitor at the Rolex 24 who passed away in 2008.

“He was a tremendous man, a guy who was so influential in my life,” said Graham Rahal, who debuted in IndyCar with Newman/Haas/Lanigan Racing in 2007. “I thought about him a lot the past few weeks, with Dan Gurney’s passing, reflecting a lot on the past. I wish he was still with us. He left us in 2008, but his legacy lives on. Tremendous guy. He was what you wish all celebrities would be like. I was very fortunate to get a lot of one-on-one time to get to understand what he felt about a lot of things. I just wish I could have spent more time with him.” 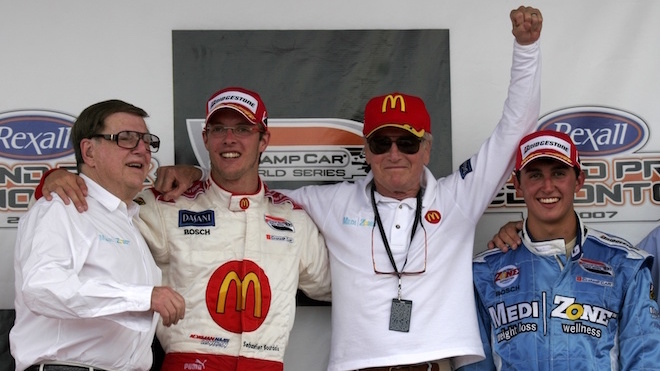 “It was a very privileged relationship with him,” Bourdais said. “He was a great man. When I met him, his [acting] career wasn’t the most important thing to him anymore. He really wanted to do things he enjoyed, and I was there for a bit of it. We had great times, and he was the team’s biggest supporter. He was there to share the great – and not so great – moments.”

Gunnar Jeannette began co-driving with Newman in 2000, when they co-drove in both the Rolex 24 and 24 Hours of Le Mans.

“I have a lot of extremely fond memories of being around Paul,” Jeannette said. “From my perspective, he was never really an actor. When I got to know him, he was always the guy who always hung out at the race track. That’s the thing that Paul liked the most about the racing environment. He was among his peers, and not people who were bothering him all the time for autographs. It was amazing.

“The last couple of races I did with him he was well into his seventies, and he was upset because he was two seconds off the pace. He wore himself down, because he wasn’t where he wanted to be. That really describes how much of a racer he was.”

Although not at Daytona, Mario Andretti also offered his thoughts.

Remembering my dear friend Paul Newman who would have been 93 today. #ForeverCool pic.twitter.com/ulm5Wz1dMm