A.J. Foyt Racing’s 2018 drivers Tony Kanaan and rookie teammate Matheus Leist tested together for the first time at Sebring International Raceway’s modified road course together this week, and team president Larry Foyt was pleased with the results of the two-day program. Kanaan had tested the 2018 aero kit in December but this was the Foyt team’s first look at the new and much more complex electronics system that will be used this season by all teams.

“We made a lot of progress,” Foyt said. “Day one was our first experience with the new electronics. That was surely a patience tester, but the team and drivers did a great job checking off each box and getting everything running smoothly by the afternoon. From there, Tony was a bit of the workhorse and had to run through a great deal of changes and items we were validating from our offseason testing. For Matheus it was more about getting laps and experience than changes. He did an excellent job and got up to speed very quickly. Both cars were turning good laps by the end of the test on Thursday, so I’d say it was a job well done.” 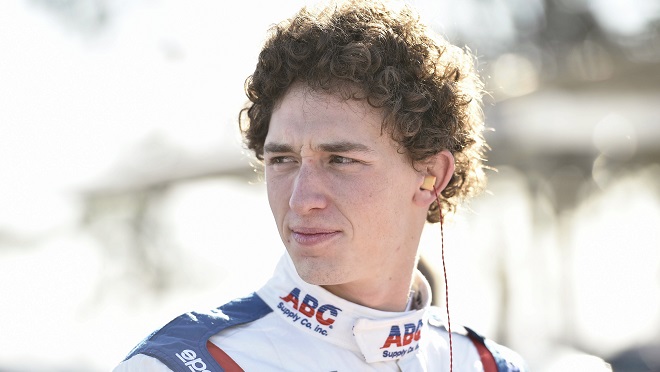 Leist (pictured above) ran 131 laps over the two days, in his first experience of working with the team on track.

“So far so good,” said the 19-year-old. “The test has been great. I hadn’t driven a racecar since September so I was a little bit off the first laps I did – the car was feeling like crazy fast! But after 10 or 20 laps I was already on the pace and feeling comfortable in the car, which is good.”

Leist, who tested the old aero kit in a half day test with Andretti’s team at Road America last summer, compared the two IndyCar stints to the Indy Lights car he raced to three victories last year.

“Indy Lights has a great car but it doesn’t have a lot of downforce,” said the Brazilian. “The new Indy car is much better on the brakes, has more downforce than the Indy Lights car and has more power, so pretty much everything is a little bit better. Comparing the new Indy car to the old Indy car, this car is a step closer to the Indy Lights car. The older aero kit just had so much downforce that it would probably take me quite a lot of time to get used to that. This new aero kit is something that won’t take as much time for me, because the kit is that much closer to the Indy Lights car. I’m already feeling comfortable with this Indy car. The biggest difference are the brakes. The Indy car has the carbon brakes, which is a huge difference for me.”

Leist acknowledged he still has plenty of other things to learn as well ahead of his rookie Verizon IndyCar Series season.

“Everything is pretty much brand-new for me,” he noted. “The car is new, the tires are new, I’ve never done any test with red tires, never done pit stops, never raced for two hours, and the list goes on. There’s so many things, it’s difficult to say what I expect for the first race but I’m sure by mid-season it’ll be all right.”

The ABC Supply-backed team heads to Sonoma Raceway for a one day test at the road course Feb. 5. IndyCar’s Open Test at Phoenix’s one mile oval is scheduled later that week, with rookies taking to the track Feb. 8 and all the drivers testing Feb. 9-10.