When racing a Cadillac DPi-V.R prototype sports car is your day job, getting behind the wheel of pretty much any street car has to be underwhelming, right?

When the street car in question is the Cadillac ATS-V coupe, a vehicle that’s as formidable on the track as it is refined on the road, “underwhelming” is probably the last word that comes to mind.

As one exciting third of the Cadillac high-performance V-Series family that also includes the ATS-V sedan and CTS-V super sedan, the ATS-V coupe is a race-inspired, 189mph, 464hp thrill ride – and Jordan Taylor can’t get enough of it.

Along with brother Ricky, Jordan drove Wayne Taylor Racing’s all-new Cadillac DPi-V.R to five wins in the 2017 IMSA WeatherTech SportsCar Championship – enough to earn Drivers’ and Teams’ titles in the headlining Prototype class for the Taylor clan. Two additional victories for Action Express Racing’s helped secure the Manufacturers’ Championship for Cadillac in the debut season for the DPi-V.R.

To celebrate the accomplishment, Cadillac has introduced the V-Series Championship Edition for all three of its high-performance models. And with only 200 vehicles being produced in total, they’re sure to fly out of dealers.

“I want one!” declares Jordan, who’s been given the chance to drive the ATS-V coupe version at Daytona International Speedway, home of the season-opening Rolex 24 endurance classic and scene of the DPi-V.R’s stunning debut victory in 2017 with Jordan and the WTR team. 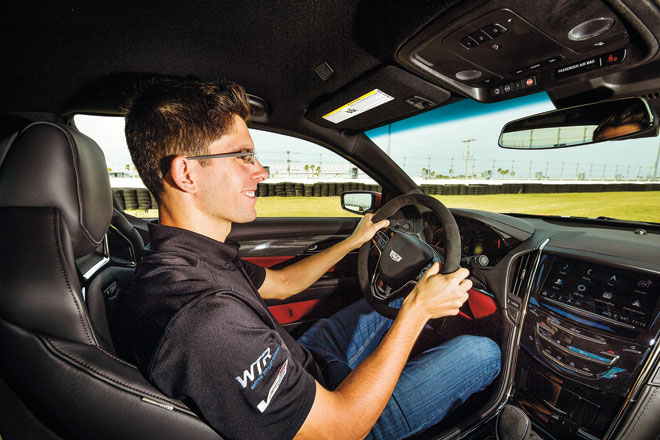 “The Championship Edition is an amazing way to celebrate what Cadillac and its teams achieved in 2017,” he says. “Every V-Series is an incredible piece of machinery, but they’re something else again when you get them on the track.

“I’ve driven both the CTS-V and the ATS-V in the Cadillac V-Performance Academy program at Spring Mountain Motor Resort, and I couldn’t believe the level of capability these cars have for something that you can drive right off the showroom floor. I was driving them just like they were racecars on the track. The balance and the braking performance are phenomenal, and the power and torque are awesome, too – up there with my racecar.

“Then you take one out on the road, switch the Driver Mode Control from Track to Tour, and suddenly it’s smooth, refined and relaxing – a Cadillac. It’s a car you can drive to work or the grocery store every day. But flick it to Track mode again and the ride, the steering, the feedback you’re getting – even the sound – the whole experience goes up a level, and you’re ready to have a total blast again at a track day. I love this car!”

Dillon Blanski, Cadillac’s Lead Creative Designer for road cars, played a significant role in the creation of the DPi-V.R racecar, working with Cadillac Racing and chassis-builder Dallara to integrate Cadillac style without compromising performance. And given his immersion in that program, it was only natural that he’d lead the way on the V-Series Championship Edition.

“Being at Daytona with the teams for the DPi-V.R’s debut, and to watch it drive across the finish line for the Rolex 24 win was pretty special,” says Blanski. “So to be able to bring it full circle to produce a special edition car for the street that celebrates a championship and all those wins, that just makes it even more special.

“With the Championship Edition cars, I worked in as much representation of the DPi-V.R graphically as I could to celebrate winning the championship. We drew inspiration from the graphics on the tail fins of the racecars and incorporated those into the special edition. Plus, we brought over things like the wheels and the Brembo brakes that are street versions of those used on the racecar. The visual connection is very strong.”

Add in the track-capable performance of every V-Series model and the Championship Edition is a fitting tribute to Cadillac’s newest racecar.

Only 14 drivers got to race a Cadillac DPi-V.R in 2017, but thanks to the V-Series Championship Edition, a couple hundred more will get to celebrate its success in exhilarating, high-performance style. 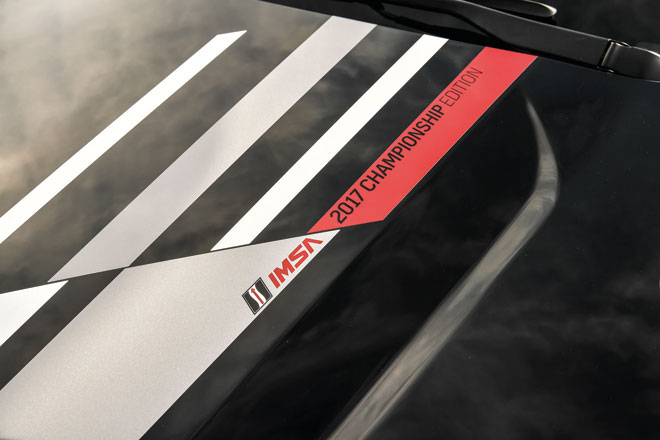 Cadillac performance graphics on the hood and spoiler are an homage to the DPi-V.R racecar’s fin stripes, while the accented high-gloss carbon-fiber interior trim and Morello Red stitching bring the visual theme to the interior.

And like all ATS-V coupes and sedans, the Championship Edition is powered by Cadillac’s 464hp, 3.6-liter, twin-turbo V6 engine. That translates to a 189mph top speed on the track and 0-60mph in 3.8sec – seriously impressive performance.

Cadillac’s V-Series Championship Editions are a race-inspired, track-capable salute to the DPi-V.R’s stunning debut season. Find out more about the entire range of V-Series vehicles HERE.

Get the latest news on Cadillac’s 2018 race programs HERE.