The IndyCar-related comments made Fiat Chrysler Automobiles CEO Sergio Marchionne to Italian journalists at the North American International Auto Show have raised optimism and questions regarding the brand’s intent.

“Why not Alfa Romeo and IndyCar? We think about it,” Marchionne was quoted as telling the German outlet Motorsport Total, and with his comments, an old topic has become new.

Under the former leadership of FCA’s Ralph Gilles and Beth Paretta, the concept of using an IndyCar engine supply program to build awareness for Alfa Romeo’s re-introduction to the American market made the rounds in 2014 or so, but with their recent career moves, enthusiasm waned within the competition department in their absence.

Marchionne’s brief statement in Detroit registered with IndyCar’s Jay Frye, but the series’ competition president also declined to confirm whether discussions have been held with the company.

“It’s encouraging to us to have an influential person mention IndyCar,” Frye told RACER. “We went on a roadshow to explain what we’re doing – went to Europe – at the end of the season and met with a lot of manufacturers. Our five-year plan on engines and the next IndyCar chassis has been very well received.”

Despite the positive overture from Marchionne regarding Alfa Romeo as a third supplier, Frye says Chevy and Honda will be locked in a two-way IndyCar duel in the coming years.

“We’ve spoken with a lot of prospects, and there’s been great interest, even with those who say the timing is off because they’ve just launched a program elsewhere. And there’s been follow-up meetings when we’ve been asked to come back, which is a great sign, but is anything imminent? No,” he added.

If FCA or any other manufacturer were to take on Chevy and Honda, it would coincide with new engine regulations the series is in the midst of completing.

“The entry point is 2020 or 2021,” Frye said. “Maybe it doesn’t feel like there’s a sense of urgency because there’s nothing coming right now for this season or next, but if a manufacturer came to us today and said they’re in, let’s do this, the earliest they’d be in the field is 2020. It takes time, so everything we’re discussing is a ways in the future, but to get there, we’d still need to pull the trigger in the next 12 months with someone to hit that 2020 or 2021 timeline.” 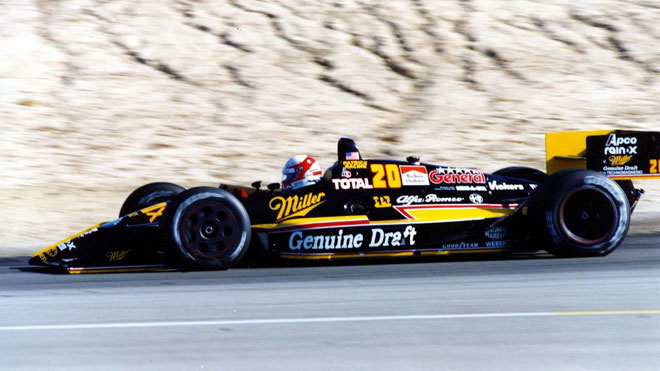 Alfa Romeo’s most recent involvement with IndyCar came during three ill-fated seasons from 1989-1991 (pictured above). Considering the bespoke nature of IndyCar’s chassis and engine specifications, a specialist engine builder would be required for the project which, barring the nomination of an outside firm like Cosworth, might be best suited for its Formula 1 engine department at Ferrari.

Logistics aside, Marchionne’s recent furor over F1’s future engine plans (among other subjects) have produced multiple threats to quit the series, taking Ferrari – F1’s most popular team – and presumably Alfa Romeo, which returns in name this season with Sauber, from the grid.

Whether the pro-IndyCar comment at the NAIAS was genuine, or should be received as part of his ongoing effort to stoke fear within F1 about a possible Ferrari departure, is open for debate.

The last time IndyCar had three engine manufacturers to boast came in 2012 when Lotus, through the Judd family’s Engine Developments operation, attempted to compete with Chevy and Honda on a miniscule budget. Lotus, having been trounced by the Bowtie and the Japanese brand, did not return the following season.