Danica Patrick will end her motor sports career competing with a sponsorship she’s most recognized for – GoDaddy.

The company announced Thursday it will back Patrick’s ventures in both the Daytona 500 and the Indianapolis 500. The effort has been called the “Danica Double.”

GoDaddy has been a supporter of Patrick since 2006, when she was competing in the IndyCar Series. When Patrick made the move to stock cars in 2010, GoDaddy followed, and was Patrick’s primary sponsor until 2015. As the face of the company, Patrick appeared in 13 GoDaddy Super Bowl commercials.

“This is definitely the way I want to finish my racing career – at these two iconic races, backed by my iconic, long-time sponsor,” said Patrick. “GoDaddy was there for me when my career was just really starting so it’s exciting to be getting back in the GoDaddy ‘green’ for my final two races.

“Our brands have always been powerful together, and I think it’s awesome to have them at my side when I go ‘all in’ with my business after racing.”

Patrick still has not announced the teams she will drive for in either race. She expressed earlier this month how things are progressing slower than she’d like. Her list of options became one less last week as Chip Ganassi Racing president Steve Lauletta revealed that CGR is out of the running to field Patrick in either race. 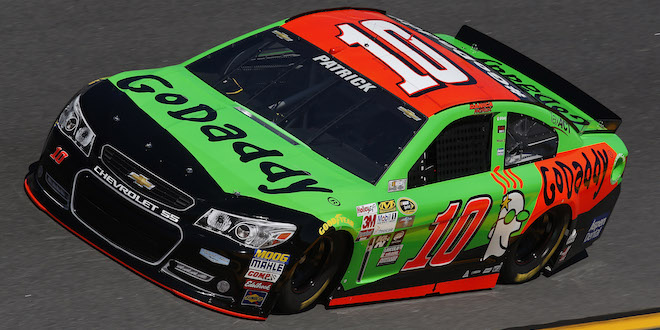 It was November when Patrick announced she would no longer be competing full-time in NASCAR after five seasons at Stewart-Haas Racing. She became the first female to win a pole in NASCAR’s premier series when she captured the top spot in the 2013 Daytona, and her best finish in the event is eighth.

In the Indianapolis 500, Patrick made her mark with two top-five finishes in seven starts. Patrick has led 29 laps in the event.

“You could say, ‘we’re getting the band back together,'” GoDaddy chief marketing officer Barb Rechterman said. “It makes sense in that our goals are so well-aligned – she’s passionate, tenacious and creative just like so many of our customers who are also looking to leverage the power of the Internet and turn their ‘side hustle’ into a full-time business. Danica absolutely epitomized the heart of our GoDaddy customers. We love it.”