Hinchcliffe revved up by Gade's addition to SPM

Hinchcliffe revved up by Gade's addition to SPM

James Hinchcliffe will have plenty of adjustments to make this season with all the changes taking place at Schmidt Peterson Motorsports.

The first for the charismatic Canadian could come with his new race engineer Leena Gade, who brings a sizable international fanbase to the program after her multiple wins at the 24 Hours of Le Mans with Audi. Always among IndyCar’s most popular drivers, the ‘Mayor of Hinchtown’ might need to find a new comfort zone as the second-most famous person on SPM’s payroll.

“When the announcement went out, we were texting and I told her, ‘Wow, I didn’t know my engineer was such a celebrity…don’t forget us little guys down below!” a laughing Hinchcliffe told RACER. “All kidding aside, I think it’s awesome that the feedback on social media was incredible – overwhelming. The funny thing is, we just want to get to work. We’re over the ‘new toy’ phase and want to go racing.

“But it’s cool to see so many people recognize the significance of her move and what it means to us at Schmidt Peterson. You can’t ignore the fact how much this means. And I think I just inherited a bunch of support from her fans from Europe…now I need to make sure I don’t let them down!” 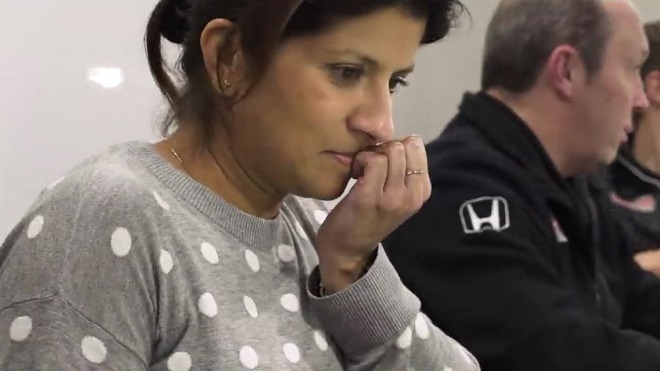 With the Briton (above) installed as his new engineer, Hinchcliffe will have one of racing’s most accomplished names in charge of the No. 5 Honda Indy car. Considering her lack of oval racing experience, and the newness of engineering an open-wheel car in North America, Hinchcliffe and new SPM technical director Todd Malloy can also be counted upon to lend their knowledge and accelerate Gade’s command of IndyCar competition.

“Now that she’s touched down on U.S. soil, we’ll spend a lot of time going over past events with the team,” he said. “We’ll look at what worked, what didn’t, how we dealt with certain problems, what results we found, and we’re really giving her a crash course on not just the engineering side, but the race strategy side and IndyCar culture. We’ll have a couple of tests together before the first race at St. Pete, and we also have Todd in an overseeing position for both cars.”

In light of Gade’s rapid rise within the Audi Sport LMP1 program, Hinchcliffe is confident Malloy’s introductory assistance will taper off rather quickly.

“In the beginning, I think he’ll be mentoring her a lot, but I can’t think of anyone better to help her,” he continued. “We know there’s going to be a teething process, but if you know her career, she has a trend of being thrown in the deep end, and she doesn’t sink; she’s still breathing, so this is just another one of those scenarios and we expect her to be an exceptional member of the team.”

Coming from the Audi Sport team and its annual budget of hundreds of millions of dollars, Gade will have fewer resources at her disposal in IndyCar where spending more than $8 million per year on an entry is rare. The comparatively simple Dallara DW12 chassis, 2.2-liter twin-turbo V6 Honda engine, and UAK18 bodywork will also be a significant change after years of mastering Audi’s hybrid-assisted turbodiesel all-wheel-drive prototypes, and as Hinchcliffe sees it, it could be a positive.

“We have fewer systems on the car to worry about; it’s not as complex as having multiple drivers to deal with in the same car, a KERS system, all the electronics and everything else that makes those cars so insanely cool but also kind of crazy,” he said.

“What we have here in IndyCar is more stripped down, maybe more pure, even. And I think in a lot of ways, because the car has stricter rules to deal with, it could be a blessing. Our cars might not be like the P1 cars, but if you look at all the tracks she’ll come across – Indianapolis and Toronto and Iowa and all the places that are unique to IndyCar – there’s going to be a lot of new puzzles for her to solve.”