Felix Rosenqvist bided his time and made amends for missing out on victory in Marrakesh last year with a late move on Sebastien Buemi to clinch his second consecutive win of the season.

The Mahindra Racing driver looked comfortable in the fight at the front and closely followed Buemi for the second stint ready to pounce. The Swede, who was fortune to complete the distance after a battery change between qualifying and the race, stuck behind the slipstream of the Renault e.dams driver and made a lunge up the inside of Turn 7 to take the lead.

From there Rosenqvist didn’t look back and held on to victory at the same venue where he lost out on the win in only his second-ever Formula E race. It’s the first time Rosenqvist has stood at the top of the ABB FIA Formula E Championship standings, four points clear of DS Virgin Racing’s Sam Bird who came home in third place.

“At one point in the day I was going to be settling somewhere in the middle of the mid-field after practice as we were struggling a lot,” Rosenqvist said. “We then made some analysis and in qualifying we found out how to work the tires properly, so that was a really good comeback before the race. I was told I had to change my battery thirty-minutes before jumping in the car before the grid, so I was praying that my second car would be ready. Big thanks to the Mahindra guys. 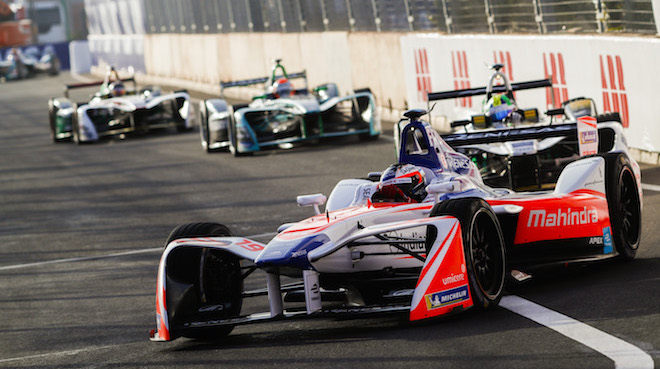 “I think I was a little bit lucky with Lucas dropping out of the race quite early on, and obviously Sam had a problem with his car on the main straight as well. I tried to keep calm and look at my energy, because this race wasn’t really about the temperature but more about energy, and when the moment was right I went for it – super happy!”

Buemi, who only managed to score a solitary point in the opening two rounds in Hong Kong, showed a return to form starting from the front of the grid from Julius Baer pole position. The Swiss champion made a clean getaway and led through the pitstop phase, but ultimately lost out to Rosenqvist.

However, it wasn’t such plain sailing for Buemi as his preparations were hampered by an issue with the water pump. The Renault e.dams engineers had to invert the order of his cars to ensure they could fix the problem and get him out in time.

“Ithink Felix had a bit more pace in the second stint, not much, but then I was overtaken at the end and I thought I would leave it to the last minute to use Fanboost, but it didn’t work,” said Buemi. “I was annoyed, I didn’t properly move over to the inside and he managed to pass me, otherwise I would’ve closed the door a bit better, so I don’t know what happened. He had a little more pace and he deserved the win, so I don’t really think second is bad, but a big disappointment when you lead for most of the race.”

It was a similar story for Bird, who remained behind the rear wing of Buemi in the opening laps but gave up the position to Rosenqvist after a recurring technical issue caused him to slow down. Despite relinquishing the place, Bird took the checkered flag in third place to continue his strong start to the season.

Another name carrying over form from Hong Kong was season one champion Nelson Piquet Jr, who equaled his best-placed finish of the current campaign in fourth for Panasonic Jaguar Racing and scored the extra point for Visa fastest lap. The Brazilian gained a place in the mandatory car swap, coming out ahead of Jose Maria Lopez making his Formula E return with the Dragon outfit.

Lopez – who’s familiar with the Marrakesh surroundings having raced here in other categories – put on an impressive performance from the second row of the grid to collect eight points in sixth-place behind Jean-Eric Vergne for Techeetah.

Rosenqvist’s teammate Nick Heidfeld scythed his way through the pack to finish seventh after hitting the wall during qualifying. Formula E debutant Tom Blomqvist claimed points in his first-ever race for Andretti in eighth.

It wasn’t a day to remember for Nico Prost. The Frenchman and three-time E-Prix winner was pitched into a spin by Andre Lotterer sending him to the back of the field, and later picked up a 20-second post-race penalty for speeding under Full Course Yellow – leaving Alex Lynn and Daniel Abt to round out the top 10 positions.

Just moments from the end, a multi-car smash on Turn 10 involving teammates Maro Engel and Mortara as well as Mahindra Racing’s Nick Heidfeld meant all three made it across the line with damaged cars.