Jordan Taylor gave Cadillac a sweep of leading all seven practice periods as the Roar Before the 24 came to a close with a final one-hour session on Sunday afternoon, ending the three-day dress rehearsal for the 56th Rolex 24 At Daytona. IMSA WeatherTech SportsCar Championships competitors will return to Daytona International Speedway on Wednesday, Jan. 24, with opening practice and qualifying the following day.

Taylor was at the wheel of his father Wayne Taylor’s No. 10 Konica Minolta Cadillac DPi-V.R, setting a best of 1m36.757s, followed by the No. 31 Whelen Engineering Cadillac of Mike Conway, at 1m37.114s.

“We have a year of experience with the Cadillac, compared to many of the other competitors,” said Cadillac representative Max Angelelli. “This is not our first time here, but it is for many of them, so we’re taking advantage of it. When we come back for the race, everyone will go faster and faster – it’s a normal progression. But right now, how can I not be happy?”

“The Roar went really well for us,” said Performance Tech team owner Brent O’Neil, whose team – winner in the now-defunct Prototype Challenge category a year ago – has made the step up to the top class with the No. 38 ORECA 07-Gibson for James French, Kyle Masson and O’Ward. “We made a little mistake in that qualifying session, went the wrong way with the car and that cost us about five or six tenths, and this field is really close. We’ve been using every session as a test.

“The Roar has been a great learning experience. I hope we can continue improving and have a chance at a podium.” 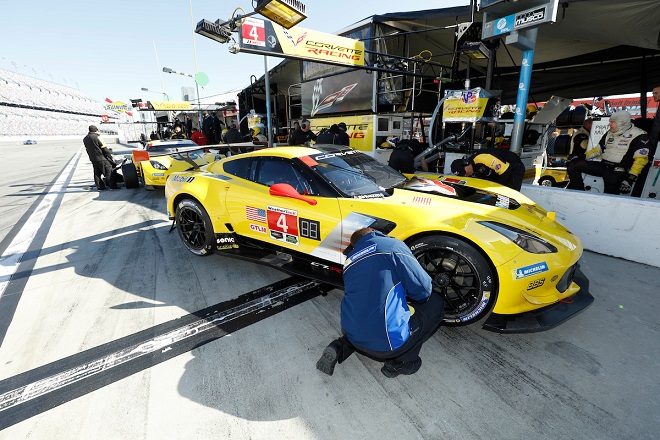 After setting the fastest time in Sunday’s qualifying, Ford Chip Ganassi Racing parked both of its Ford GTs for the final session. The Porsche GT Team set the fastest two laps, led by Laurens Vanthoor in the No. 912 911 RSR with a 1m44.550s, followed by the two Corvettes, paced by Jan Magnussen in the No. 3 Corvette C7R, at 1m44,794s.

“As a driver, you always want more and more time in the car, but track time is at a premium at the Roar every year,” said Mike Rockenfeller, driver of the No. 3 Corvette C7.R. “I feel we have maximized our efforts and run as many miles and as quickly as we can. We all know that in two weeks’ time, the track conditions likely will be different. It has been quite cold this week but we have learned things that can help us for the race. I feel we are heading in the right direction.”

Ezequiel Perez Compano used a late flier to lead GTD with a 1m47.802s in the No. 19 GRT Grasser Racing Team Lamborghini Huracon GT3. He was followed by A.J. Allmendinger at 1m47.821s in the No. 86 Michael Shank Racing Acura NSX GT3.

Forty-three of the 50 entries – including all 20 Prototypes – participated in the incident-free final session.