Pruett to retire after Rolex 24

Pruett to retire after Rolex 24

The upcoming Rolex 24 At Daytona will be Scott Pruett’s final appearance as a driver.

“As an athlete, if you’re fortunate to have a long and successful career, and lucky enough to come to the end on your terms you’re truly blessed, and I am,” Pruett said to preface his surprise remarks to the media in attendance at the Roar Before the Rolex 24. “You’ve been asking me this question for a long time and I’ve kept you in the dark, and today, after 50 years of racing, the 2018 Rolex 24 At Daytona will be my last race.”

Pruett – who began his career racing karts at age eight – will drive the 3GT Racing No. 15 Lexus RCF GT3 with Jack Hawksworth, David Heinmeier Hansson and Dominik Farnbacher in his 28th appearance in the Daytona classic. Pruett first competed at Daytona in 1985, and went on to score a record-tying five overall victories among a record 10 class triumphs.

His career includes competing three times in the Indianapolis 500, where he was co-rookie of the year in 1989. He won the 1995 Michigan 500 among two CART victories, and raced in the 2000 Daytona 500 during a brief stint at NASCAR’s premier level. He also won the 1991 IROC event at Daytona, beating Bill Elliott to the wire in his comeback less than a year following a major accident in testing.

However, it’s in sports cars were he will be remembered. He won three Trans-Am titles and the IMSA Camel GTO crown twice early in his career, and in his comeback with Chip Ganassi Racing captured five titles between 2004 and 2012 (below). Overall, he’s scored a record 60 victories in major sports car competition. 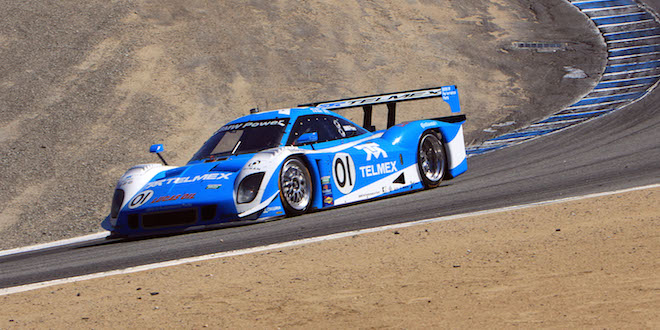 “Even though I’ve had achievements in other forms of racing, sports cars is where my heart is,” Pruett said. “I totally dug doing Indy cars for 10 years and my NASCAR stint, but overall, I think people will remember me for sports cars. By far, sport cars was my thing. I loved the competition. From IMSA to Grand-Am and back to IMSA, the thing that was constant was the competition.”

Two of Pruett’s Rolex 24 victories have been with 3GT team owner Paul Gentilozzi, winning overall in 1994 in a GTS class Clayton Cunningham Nissan and in 2002 in the GTS category in a Jaguar fielded by Gentilozzi.

“To come to a race like this, it’s not driver, it’s drivers, and it’s team,” Pruett (below with Lexus Racing boss Mark Egger) said. “There are so many elements that are a part of it, and to win as many times as I’ve had makes it even that more special.”

Gentilozzi said that having Pruett in his line-up is a plus for his race team.

“Those who know him know how driven he is to succeed,” Gentilozzi said. “Scott raises the level of expectation of everybody on your team. He makes you do your job.”

Away from the track, Pruett owns and operates an award-winning winery – Pruett Vineyard. He will also continue in a role as an ambassador for Lexus.

“Now I will be spending a little more time with my family,” Pruett said. “The wine business has gone far beyond my expectations. Twice I’ve had the highest-rated Syrah in the world by Wine Spectator – and I’m the winemaker – and it’s a family business. I’ve also extended my relationship with Lexus, being able to out and drive fun cars and promote a brand that I truly love.”

While he might miss the competition, there’s one element of retirement that Pruett is looking forward to enjoying.

“Not having to go out in that damn workout room every day and sitting on a rower or an elliptical,” he said. “It’s been so many years of working out. All my training is indoors, and I can tell you, it’s incredibly boring, and I’ve been doing it for years and years and years! Now I’m looking forward to going out and having an incredible final race in the Rolex 24.”