New Ed Carpenter Racing signing Jordan King said that encouragement from former GP2 teammate Alexander Rossi was a factor in his decision to switch to IndyCar for 2018.

The Briton, who was confirmed earlier today as the road/street course driver in the team’s No.20 entry [below], raced alongside Rossi at Racing Engineering in 2015, and said that the 2016 Indy 500 winner was among those that he sounded out when the opportunity to move to the U.S. arose.

“There’s always a bit of skepticism changing paths, and obviously for me it’s actually moving country and a couple of things like that, and for me someone likes Alexander Rossi, he’s done it, but the other way around,” said King, who is managed by another former F1-turned-CART racer in Mark Blundell.

“[Rossi] came over to Europe, and I raced with him and I was teammates with him. I kind of trust him and believe what he’s saying, so I spoke to him quite a bit. From everything down to the car, how did the car drive, what’s it feel like, all the way through to what’s it like living in the U.S. So just filling in all the gaps, [it] was quite reassuring to speak to someone who has done it. 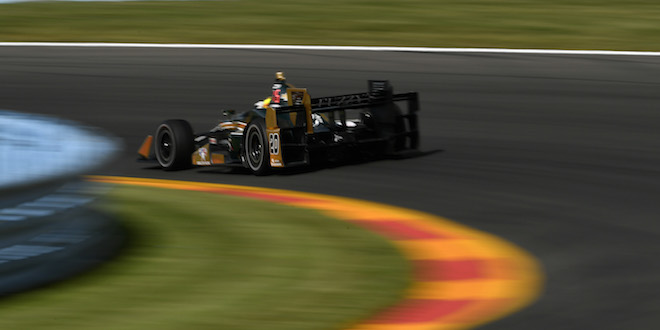 “I think the most friendly advice he gave me was actually just, ‘you’ll love it out here’. More from the sense of, I think, how much he’s enjoyed himself, as he was very focused on Formula 1 at one point in his life, and he’s gone over [to IndyCar] and had some great success. We spoke about the car a little bit, driving styles, the feeling you get within the car, what to expect, a little bit more technical stuff, how much it weighs, how that affects the driving style, where you can find performance in general. So it was quite nice to hear his view compared to cars that we’ve both driven before, and kind of get my head around how I need to drive it when the day comes.”

While there are currently no plans for King to race on any ovals in 2018, the 23-year-old has ambitions to eventually compete in IndyCar full-time. To that end, team owner Ed Carpenter is working on plans for King to take part in an oval test at some point during the season.

“We’re still nailing down when exactly that’ll be, but he will get the opportunity to do a little bit of oval testing to get his feet wet with that,” Carpenter said.

“I think it’ll be a good drill to go through, also, just to give him a better idea of what the total capabilities of the car are, even if he’s not racing on ovals, just to have an understanding of what the car is capable of when it comes to some of the higher speed road courses, as well.”