Magnus Racing returns to IMSA in 2018

Magnus Racing returns to IMSA in 2018

Magnus Racing is putting the band back together for the 2018 IMSA WeatherTech Sports Car Championship season.

Having renewed its relationship with Andy Lally in October, the team will reunite him with John Potter to drive the No. 44 Audi R8 LMS GTS and add Andrew Davis for the North American Endurance Cup (NAEC), as well as Markus Winkelhock for the upcoming Rolex 24 at Daytona. The news comes on the heels of an imminent announcement from Audi Sport.

“We’re excited to return to IMSA competition and our endurance roots,” said Potter, Magnus Racing’s team owner. “Obviously Magnus has enjoyed a number of successes throughout the years of IMSA and formerly GRAND-AM, and in our first season with Audi in 2016 we had one of our best seasons to date. 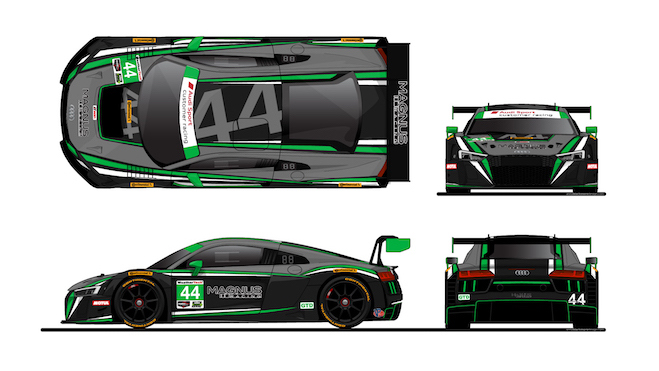 “Returning to the series for 2018, we feel stronger than ever, not only with an incredibly fast car but also the same crew that took us to victory in 2016, as well as an incredible lineup in Andy, Markus and Andrew. The support from Audi over the years has obviously been a big factor, from winning in our first race together at Daytona, to helping the secure the Intercontinental GT Challenge title last October, it’s been a relationship that has proven fruitful and instantly competitive.

“With our team, I feel very fortunate to be surrounded by such an incredible group, and we hope we can begin with immediate success.”

“I couldn’t be more thankful for the opportunity to join Magnus and contend for all four NAEC rounds,” said Davis, who drove for the team during its American Le Mans Series debut in 2010. “I’ve known many of the guys on the team even further than [2010], so to be engaged in the full Endurance Cup is something I really look to perform in. The Audi R8 LMS GT3 is an incredible car, and given my experience in the same machine over the last two years, I’m looking forward to getting behind the wheel.”

After securing the GTD class win at the 2016 Rolex 24, two disqualifications – one for a ride height infraction and one for a drive time error – factored in the decision to take a hiatus from IMSA in 2017 and run a two-car effort in Pirelli World Challenge. In October the No. 44 Audi Sport R8 drove to a late-race victory in the team’s Intercontinental GT Challenge debut during the California 8 Hour race at Mazda Raceway Laguna, running as a fully supported effort with Audi Sport and drivers Pierre Kaffer, Winkelhock and Kelvin van der Linde.

Magnus Racing has produced consistent success in IMSA competition. In Lally’s debut drive for the team in 2012, Magnus Racing took its first victory at the Rolex 24 at Daytona, following that up with winning the Brickyard Grand Prix en route to a debut title in the North American Endurance Cup. Since then, the team has scored four more victories, including the 2014 12 Hours of Sebring, 2016 Rolex 24 and 2016 North American Endurance Championship.