Spend any amount of time with Alex Bowman these days and two words are bound to come up repeatedly in conversation.

It’s hard for the 24-year-old to address his new reality in any other way. Bowman has been waiting in the wings since July to take over the No. 88 Chevrolet at Hendrick Motorsports. It is the best full-time opportunity he’s been given in the Monster Energy NASCAR Cup Series and it comes off an impressive tenure in the car last year while Dale Earnhardt Jr. recovered from a concussion.

There really are no truer words for what has become Bowman’s life.

“Absolutely. I thought I was going to have to go to college and quit [racing],” Bowman told RACER. “There was plenty of times I wanted to quit and plenty of times after final practice like, man, I don’t want to spend 500 miles in that thing tomorrow. I’m excited and it’s just a dream come true.

“I probably won’t believe it’s real until we get to Daytona, it’s kind of surreal until then. … This is the happiest I could possibly be with where I’m at and the team I’m driving for. Nationwide, Axalta and everybody is going to keep me busy, I’m sure. We’ve got a bunch of stuff to do with them, I think my calendar is already booked into January with stuff. So, just really looking forward to working with everybody. The offseason is going to be fun.”

This offseason is much different than any other Bowman has ever gone through. Not only will he be keeping busy, but knowing he has job security going into next season is a rare feeling. Life has also changed in other ways since Bowman was thrust into the spotlight late last year. He says it’s gotten easier, and he looks at the parallel between him and Clint Bowyer.

Until Bowman was given an opportunity in Hendrick Motorsports equipment, many would claim he didn’t know how to drive. It’s an easy assumption, as he spent his first two years in the Cup Series running in the back with BK Racing and Tommy Baldwin Racing. But since his 10 races in the No. 88, the conversation has changed for some folks.

“After how we ran throughout most of last year and especially getting in the [Chip Ganassi] Xfinity car at Charlotte and running really well off the bat, I think there’s just a little more respect from a lot of the drivers in the garage,” said Bowman. “It’s easy to be like, oh, he runs 35th every week and some of those guys I don’t think understood how it really was because guys who have always been in good equipment, I don’t think they get how it is back there sometimes.

“Then you have guys like Clint Bowyer who go from running up front to running in the very back and then, all of a sudden, back to running up front and all that changed was the car. There’s a lot of guys that could win Cup races that will never get the opportunity and I think my situation was a little eye-opening.”

Another way that life has changed brings laughs for Bowman whenever he explains it.

“From January to June 2016 I was selling seats to be able to pay rent, I was super broke, didn’t know what I was going to do. Was stressing out,” Bowman said. “Then in October I bought a house. Definitely life changing right there. That was cool.”

Bowman can’t answer the “why me?” question. Why Earnhardt went to bat for Bowman to be the interim driver when he didn’t feel well last July still doesn’t make sense to Bowman. He does know everything lined up right since he was already on the sidelines, was working in the simulator for Hendrick Motorsports and when he got behind the wheel, he fit into Earnhardt’s seat. 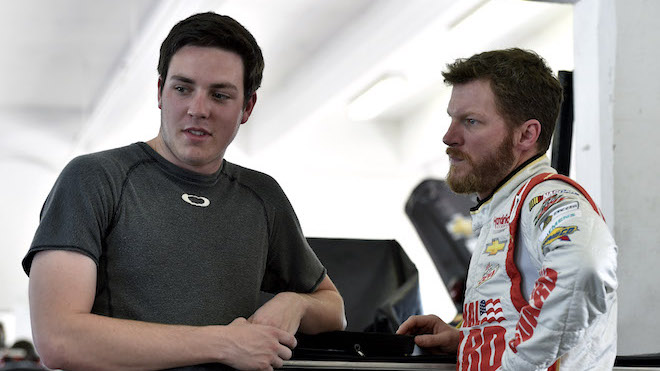 His initial relationship with Earnhardt started in 2014. The two began to hit it off when Bowman was a rookie in the series. At Richmond that fall, Bowman qualified right behind Earnhardt and the two ended up riding around the track together in the same vehicle after driver introductions.

“And just started talking. He had two open Xfinity races [for JR Motorsports], he was kind of confused how I qualified [near] him in a BK car, so it kind of went from there,” said Bowman. “I ran Charlotte and Phoenix for him; we ran really solid in both races and didn’t get the finishes we deserved. Then we tried to put together a deal for the following year and just couldn’t drum up the sponsorship to do it and the year after we were really lucky to have Valvoline help us and a lot of great partners help us put together a nine-race deal at JRM for ’16.”

Earnhardt continues to be one of Bowman’s biggest fans. Rick Hendrick has become one as well. The 68-year-old team owner didn’t know much about Bowman last year, but Bowman says the two have become good friends.

Bonding has come over a mutual love of cars and modifying cars. It’s even recently escalated to smack talk. Bowman says he and Hendrick will soon engage in a grudge match with their respective Corvettes.

“I never would have guessed from outside looking in that he would be how he is. He’s been really cool,” Bowman said. “And just to listen to him tell him tell stories. It’s no secret Tim Richmond is one of my heroes and listening to him tell Tim Richmond stories is awesome.” 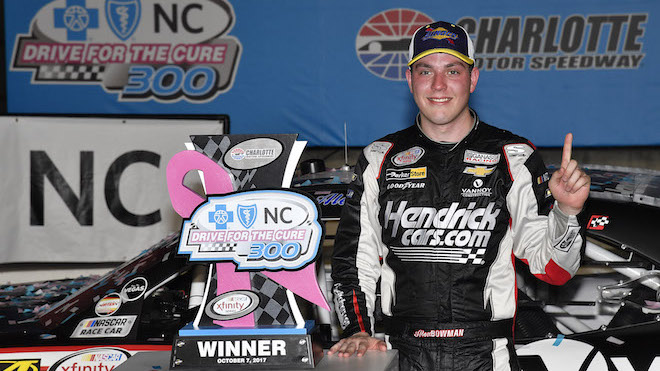 There was also Bowman’s win at Charlotte in October, and Hendrick wouldn’t let him off the phone. Sitting in the car in victory lane, Bowman was told to get out for the television cameras but Hendrick was so excited that Bowman couldn’t hang up on him.

“It’s cool to see the excitement level he has. I think he sees how hungry I am to win Cup races,” said Bowman. “It’s funny, he’ll be like, ‘I know you’re going to tear up a bunch of equipment but you’re going to be going fast when you’re doing it.’ It’s funny to hear him say stuff like that and be as excited as he is about 2018.”

Bowman’s excitement is tempered for now. Though he’s keeping busy in the simulator, testing for Chevrolet or taking care of any obligations to prepare for next season, the Daytona 500 is still some ways off.

A lot will happen between now and then. And Bowman has plenty of time to sit around and think. Think about a small detail he didn’t have when he drove the No. 88 last year: his name above the door.

Out of respect for their driver, the team kept Earnhardt’s name on the car during his absence. Sure, Bowman did have it on the car when he participated in The Clash this past February at Daytona, but it was still Earnhardt’s car. And he briefly got to see how it will look when his paint scheme for next season was unveiled.

But showing up next year knowing the No. 88 is his car with his name brings a special feeling.