Japanese team MR Racing has confirmed its intention to compete in the 2018/19 FIA WEC ‘Super Season’ with a Ferrari 488 GTE in the series’ GTE Am class.

Driver Motoaki Ishikawa confirmed that the team will file an entry on Facebook, and will race with himself, veteran Olivier Beretta and Eddie Cheever III should the team be granted an entry.

The post was the first confirmation that team will attempt to enter the championship. Prior to the announcement, Ishikawa tested a 488 GTE at the end-of-season Bahrain test this year with Olivier Beretta in an AF-Corse-run car (pictured above). For the 2018/19 program, the team will use AF Corse to run the effort.

Beretta and Ishikawa (below) have previous experience racing together in the European Blancpain GT Series, while Cheever, the Italian-born son of F1 and IndyCar veteran (and three-time Le Mans starter) Eddie Cheever, has GT experience racing in IMSA’s GTD class. 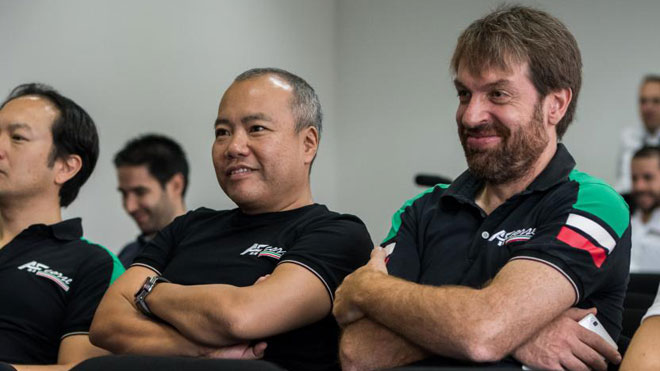 While the team has confirmed it will file an entry, it is by no means a guaranteed it will get one. With GTE Am set to be oversubscribed next year, the FIA WEC selection committee may have to turn some teams away.

In addition to the statements of intent from Gulf Racing UK, Proton Competition, Project 1, TF Sport and Aston Martin Racing to enter GTE Am for the ‘Super Season’, it is known that both 2017 WEC GTE Am Ferrari crews – Spirit of Race and Clearwater Racing – are set to file entries to return next year.