Is this the Leavine team's time to shine?

Is this the Leavine team's time to shine?

Bob Leavine had a gleam in his eye as he floated around the Great Hall of the NASCAR Hall of Fame. The word “excited” was enveloping not only the owner of Leavine Family Racing, but all those from LFR in attendance to unveil Kasey Kahne’s No. 95 Procore Chevrolet Camaro.

“You can tell?” cracks Leavine.

“It’s not like we haven’t been preparing for seven years,” Leavine says of his company’s current position. “One, me learning. I knew nothing about [NASCAR ownership], so the ins and outs of this sport [are] unbelievable. From technical, to things you don’t think about. So, me getting up where I felt comfortable in doing things and making moves and making steps, and attracting people.

“Very few people, good ones in NASCAR, want to go to work for a team that’s just running around. They want to be competitive.”

As Leavine delves into his organization’s growth, the reason for his pride is clear. The No. 95 started out as an avenue to support David Starr, who ran four races in 2011 [below]. The competitive juices quickly started flowing in Leavine, and for 2012 he hired Scott Speed. But the team was still picking and choosing its races.

“You couldn’t test back then, so we would use some races where you essentially did go and start and park because you went and worked on your cars, got your guys experience,” says Leavine. “We were building experience by going and doing that. 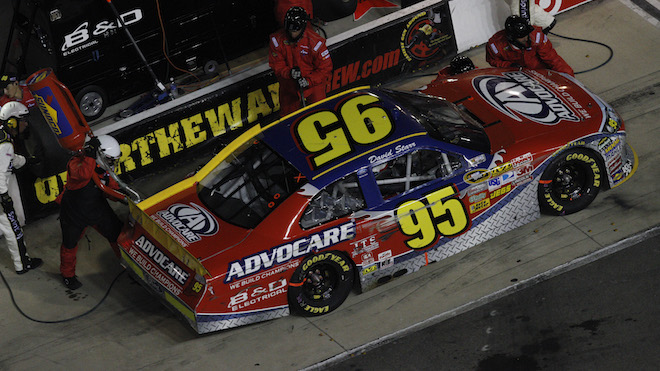 “We would love to have been running the whole race, but we didn’t have enough money. It was still coming out of our pockets. We had to pick the races we could run full-time, the ones with the better purse.”

Along the way, Leavine was hitting milestones. An established businessman in Texas, he admits that initially he didn’t understand supporting a race team meant bringing in sponsorship. His other companies “got business by our reputation.”

To support his car, Leavine knew he needed someone who understood the marketing side of the sport. Four years ago, he hired Jeremy Lang, who is now the vice president of operations.

“I was probably the biggest roadblock,” Leavine admits. “Learning and figuring out what to do. I could see how to put the operation together, but the marketing side… I needed help.”

Another step was Leavine becoming much more invested in the day-to-day operations of the team. For the first three-and-a-half years of the team’s existence, Leavine was based in Texas while the team is housed in Concord, North Carolina.

Two-and-a-half years ago, Leavine realized he needed to really put his fingerprint on the team by moving to North Carolina to split his time better. Doing so also allowed him to implement practices that worked with his other companies – building a culture of dedicated, qualified individuals.

“That’s what we’ve done little by little the last two-and-a-half, three years,” Leavine says. “Finding those people, doing well, and Michael McDowell [below, with Leavine] did a great job for us moving up through there, getting our car to run. A lot of credit [goes] to him, our guys in the shop, Jeremy making decisions, my grandson Michael, who’s director of competition. Building that infrastructure to be able to use it now.” 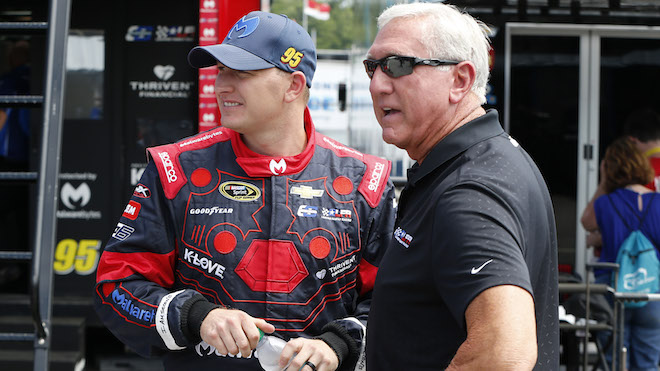 Leavine had a plan. A five-year plan, to be exact.

By 2017, his car should be able to run full-time. However, NASCAR’s move to the charter system going into the 2016 season forced Leavine’s hand.

“There’s a big difference between a charter purse and an open purse,” Leavine says. “We were forced to go a year early and we had to get a partner and lease a charter, and we had to switch manufacturer.

“We had three things going on in ’16: manufacturer [switch] to Chevrolet, leasing the Joe Falk charter and us going full-time. But then in 2017 we had Chevrolet for a year, we had our chassis and everything, so it was [about] refining; swallow all the costs.

“It took a while to gain the momentum and the confidence. It’s intimidating for somebody new to go in the garage. New owner, new team.”

Now, Leavine looks at his single-car operation has having a place in the garage. He also feels comfortable being a part of the sport.

“Started feeling that last year,” he says. “Really felt like we could fit in and be competitive. 2017 was our first full-time year with one driver. In ‘16 we had Ty [Dillon] for five or six races and Michael for the rest, so it was still a little disconnected. Ty did a great job, but that was a deal made with [Richard Childress] and getting in the alliance.

“But ’17 was us. Just us. Setup all the cars, did it all ourselves internally… we hired more body people where we could hang our own bodies and become more independent and self-sufficient. And that gave us more confidence [that] we [have] better cars and faster cars.”

With that, the expectations for the new-look Leavine Family Racing are undoubtedly higher than what would have been laid out just a year ago. Playing modest, Kahne says his expectations are “in a really good spot”. LFR will be the fifth team Kahne has driven for, with 2018 being his 15th full season.

Mack, on the other hand, was very straightforward with his answer.

“Our goal is to win races,” he says. “I wouldn’t be here unless I was thinking we were going to win races. I refuse to lose. I’m a very competitive person and we’re going to do everything we can to get that car in Victory Lane.”

And Leavine? Well, his glow grew even brighter when broaching the “W” word.

“Andy Petree [of RCR] called me, and I told him my first goal is to be the best RCR car in the alliance. Beat all theirs, the [Nos.] 3 and the 31. That’s my first goal,” Leavine said. “If we do that, the results will come. You can read into that as whatever. And there may be victory hats in our hauler.” 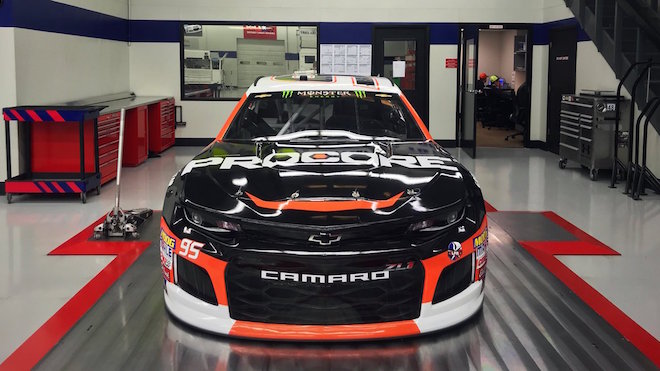