Kasey Kahne has moved on from Hendrick Motorsports, and he knows after six seasons of him being in its camp, Hendrick has pivoted from him. There are no hard feelings, though.

“I’m glad I’ve moved on because what we were doing there was not working for me, so to have that over with is great,” Kahne said Tuesday morning at the NASCAR Hall of Fame.

Moving on for Kahne means he’s now the star of the show at Leavine Family Racing. Tuesday that meant Kahne and other members of the organization gathering to unveil the Procore-sponsored No. 95 Chevrolet Camaro that will be on track for six races in 2018 as well as in 2019.

“I think a fresh start is nice. It’s a fresh start all the way around – it’s not just a different owner or a different manufacturer, it’s a fresh start everywhere,” said Kahne. “I think that’s really good for me. It’s probably the first time, maybe ever, that it’s fresh, completely new in all aspects. It’ll be interesting, but I think it’s good.”

For now, most of Kahne’s settling in at LFR has been around getting the cars situated with the right seats and other driver comfort matters. Kahne didn’t know Travis Mack, his new crew chief who also moved over from Hendrick Motorsports, previously. Since the NASCAR season ended on Nov. 19, the two have begun spending time together, and Mack says even their young children get along.

The entire get-to-know phase for Kahne at LFR is moving along quite smoothly. The 37-year-old has gone through career transitions before but admitted to team owner Bob Leavine recently this one has gone better than once expected.

“The group of people that I’m working with, the way that they’ve have worked with me, what I see out of them and the process of getting the new Camaro ready and working with RCR and things like that, I just feel it’s better than expected when I signed up,” Kahne said.

“I thought it would be pretty darn good when I signed up because I’ve watched them grow and improve each year, so I signed up to something I felt would be good. And I feel like now, being there, it’s actually going to be stronger than what I thought originally.” 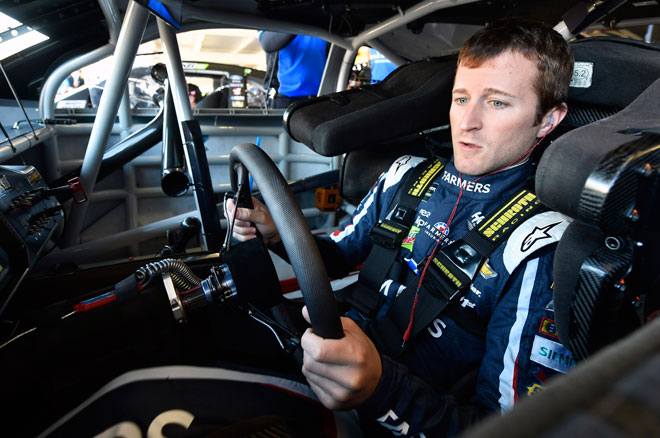 An anticipated moment from Kahne (above) and company is a Las Vegas test at the end of January. It was repeatedly mentioned by Kahne, Mack, and also Leavine, who said he’s tempted to attend.

“I feel like it’s a great place for us to get two full days of just driving and communicating and learning each other. Learning the car; learning the setups,” said Kahne. “There’s so many different things [LFR] would have done than what Hendrick would do, [and] that I would have done with them. So, between myself, Travis, our engineers at LFR, and working with the [Richard Childress Racing] group, it’s just a completely new deal.

“So, to have 15, 16 hours to work on that stuff is awesome. I didn’t think we would get that test going into the year [not knowing what the rules and procedures were]. I thought we’d show up to Daytona, race. Atlanta, race … I feel like this is a really big benefit for us.”

Speed and driver comfort are the two biggest things on Mack’s agenda.

“We’re going to really start from scratch with Kasey and myself and the car and team. Everyone,” he said. “We’re going to try to give him the best piece, but we’re going to give Kasey what he wants to feel in the car. Not so much what his teammates want to feel.

“In the past, he’s had to worry about what Chase [Elliott] has run, Jimmie [Johnson] and Dale [Earnhardt Jr.]. Now it’s just all about Kasey. Kasey is our driver and if he says he doesn’t like something, we’re going to change it, and we’re going to give him the feel that he wants.”

With a smile, Kahne said “it’s been a while” since he’d been excited to test. Kahne is looking at the benefits of having two days of track time in Vegas. Not only for the time to work with his team on the 1.5-miler, but knowing that the notebook he and Mack build will translate to many of the tracks on the Monster Energy NASCAR Cup Series schedule.

“I haven’t had a test in three years that wasn’t at a repave, road course, short track or a Kentucky repave that we come back with a completely different tire than what we tested,” continued Kahne. “To me, it’s the first time in three years that I’ve been able to go learn things you can use at an upcoming race. That’s good for myself, and it’s good for our team to have that going into a new season.”

Moving on and perhaps back to moving upward for Kahne in 2018.