In RACER Magazine: Improving the Breed?

In RACER Magazine: Improving the Breed?

When motorsports adopts and adapts technologies, it’s almost always for entirely selfish reasons: to find a winning advantage. If it helps make better street cars, then that’s a bonus.

That “improving the breed” bellwether has rung increasingly hollow since the unseen hand of downforce began to exert a tightening grip on motorsports. When Texan Jim Hall feathered his Chaparral’s suspension-mounted high wing in 1966 (above), he flipped the bird to the man (and his automobile) on the street.

Why should/how can a purpose-built racecar on – by the early 1970s – slick tires and festooned with aerodynamic devices that cause/want it to “scrape” the road have a bearing on our daily driver?

Formula 1’s grudging attempt since 2014 to redress this has been a damp squib, the remarkable efficiency gains of its turbocharged V6 gasoline-hybrids drowned by “noise” about their lack of noise.

Just four years ago the FIA World Endurance Championship’s LMP1 category was held up as a beacon of automotive worthiness when Porsche preferred it to F1, due to it being a willing and flexible high-speed laboratory for a hybrid tomorrow. Now it’s yesterday’s news.

A car industry blackened by the emission scandal of 2015 is even keener (to be seen) to be greener – and Audi, BMW, Jaguar, Mercedes-Benz and Porsche have joined Renault in Formula E’s “vow of silence.” Expect budgets to spiral and piety to wear quickly thin.

It’s time for motorsport – the show, not the business – to look after number one, starting with Liberty Media’s F1.

Which shouldn’t be difficult for a fundamentally selfish pursuit, should it?

Influential driver/engineer Mark Donohue was nicknamed “Captain Nice,” yet spent a decade seeking what he termed “The Unfair Advantage.” The stress this caused him – notwithstanding the success it brought – coined his other nickname: “Dark Monohue.”

In 1969 he qualified fourth and finished seventh at Indy in a four-wheel-drive Lola; from 1971-’72 he was at the sharp end of a 25mph spike at The Brickyard caused by spreading wings; and from 1972-’73 he proved turbochargers could prevail on stop-start road courses. He wanted to please his team, its sponsors and partners – Porsche in the latter case – but he wanted to please himself more. Pissed when a works McLaren bumped his privateer version from the pole at Indy in 1971, he didn’t blink when the misfortunes of others allowed him a victory the following year. 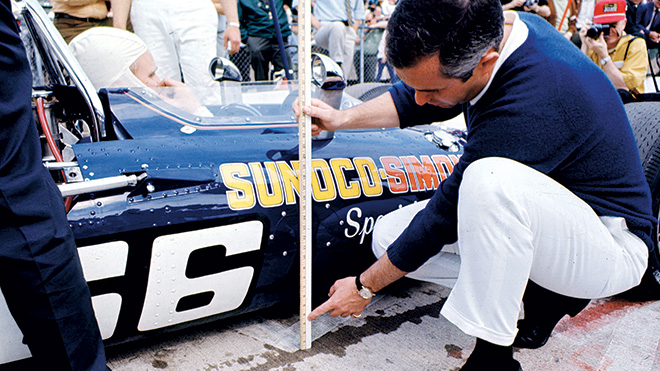 That’s not a bad thing in context. Donohue was the epitome of George Bernard Shaw’s “unreasonable man” upon whom “all progress depends.” He was, in the words of rival driver/engineer Dan Gurney, helping “accelerate the evolution of ideas” – at 200mph, given 1,000hp-plus.

Motorsports has been a technical hothouse since Count de Dion steamed (literally) the 1894 Paris Rouen race at 12mph. Occasionally a catalyst of innovation, but more usually its incubator, it’s not only regularly raided aerospace’s temptingly exotic parts bin, but also used rat-like cunning to feed its need.

Ferodo’s DS11 brake pad was originally intended for earthmovers and their ilk, yet won all bar two grands prix from 1961-’81; and the carbon-carbon system by Hitco of Gardena, Calif., that replaced it was inspired by Dunlop’s design for Concorde.

The Brabham that won the F1 titles of 1966 featured a modified Alford & Alder front upright – a light steel modular forging easy to adjust – that was first fitted to a 1930s British daily driver. 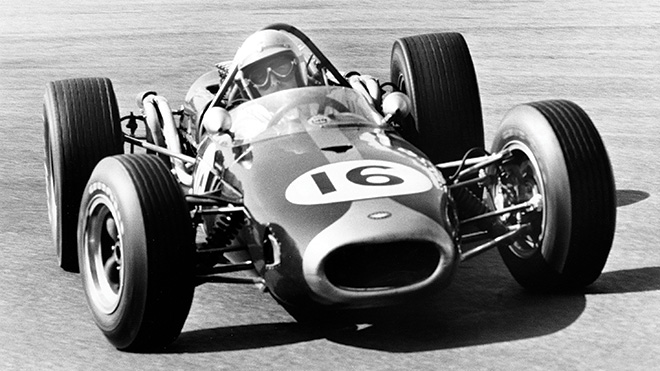 And the Heim joint used wherever a low-friction, low-compliance adjustable pivot with zero play was beneficial to the 1967 Lotus 49 was either lifted from a late-1930s Ferguson tractor’s lifting mechanism or a Luftwaffe plane brought down during the Battle of Britain.

The rubber-bushed joint between road and track, stretched and twisted by wings and fatter tires, failed totally when skirted ground effect – channelled by complex underbody shapes made possible by Owens-Illinois/Corning’s 1936 Fiberglas (yes, that spelling) patent – forced a tenfold increase in spring rate by the 1970s’ end. This in turn triggered widespread use of structural carbon-fiber composite – invented at Britain’s Royal Aircraft Establishment and patented in 1964 – during the 1980s.

Even the latest breed of hypercar merely scratches at the unreal-world potential performance numbers of these technologies. (Though that’s expected to change with the delivery in 2019 of Adrian Newey’s next-gen Aston Martin Valkyrie.)

But even humdrum street cars have benefited from racing’s most efficient aero mod: the Gurney Flap, or wickerbill. An educated guess at controlling soaring Indy car speeds, Gurney fashioned a right-angled aluminum strip during a 1971 test at Phoenix and fitted it to the trailing edge of the rear wing on Bobby Unser’s Eagle.

The powerful effect, with minimal disturbance, that it had on the pressure across the wing surfaces astounded even McDonnell Douglas when Gurney let it in on the secret. But although it has featured
since on helicopter horizontal stabilizers and high-lift airplanes – a twist from this story’s norm – its patent foundered against the rediscovery of the 1931 Zap Flap…