The Lola B09/86 prototype racer that earned Dyson Racing the 2011 American Le Mans Series drivers’ and teams’ championships has found a new home in the ‘Racing in New York State’ exhibit at the Saratoga Automobile Museum.

“We are pleased to have this remarkable example of high-tech racing on permanent display,” said Ron Hedger, a member of the museum’s board of trustees.

“The Dyson team has made its home in New York’s Hudson Valley for more than four decades, racing regularly at Watkins Glen and representing the state in races throughout the United States and abroad.” 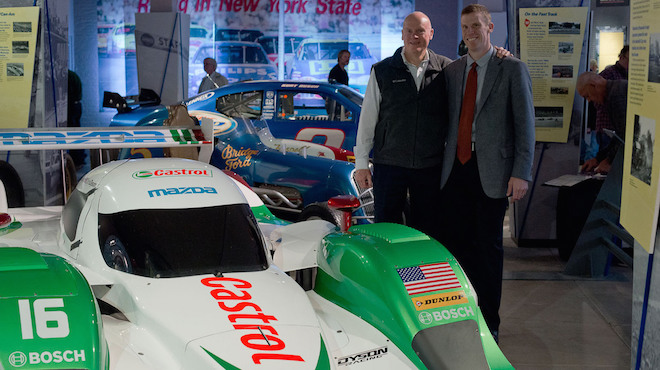 The Lola was unveiled before more than 250 guests at last weekend’s annual Lost Speedways event, and team owner and CEO Rob Dyson said that he was delighted to see the car receive such a welcome.

“It was great to see how many racing enthusiasts turned out on a holiday weekend to celebrate the broad range of racing in New York,” he said. “All of us, Chris and me and everyone back at the shop in Poughkeepsie, are happy that this car, one of the most significant ones in our team’s history, will have a new role in celebrating racing in New York State.”

Chris Dyson and Guy Smith drove the Lola to victory in the American Le Mans Series race at the Mid-Ohio Sports Car Course in 2010 – the first outright ALMS victory for Mazda, as well as for both drivers. During their successful title campaign the following season, the same car claimed outright wins at Lime Rock and Baltimore.

While Dyson Racing has been on haitus since its Bentley program in the Pirelli World Challenge in 2014 and 2015, Chris Dyson said that the team is closing in on a return to competition next year.

“We’ve kept on the core of our full-time staff,” he said. “We’ve evaluated a number of opportunities, looking for one that would make sense for us to pursue. We are currently close to making a decision regarding a fairly expansive 2018 program that will involve at least one of America’s significant road-racing series.”