“QA1 has really enjoyed supporting the IHRA with their contingency program over the years,” customer service manager Dave Kass said. “It’s great encouragement for racers to buy quality go-fast parts from manufacturers that support the series they race in. It’s also a great opportunity for QA1 to better connect with the individuals who use our parts and gain valuable feedback that results in better-performing products.”

QA1 boasts more than 83,000 square feet of space at its world headquarters in Lakeville, Minn., from which it offers its extensive line of American-made shock absorbers, suspension components, carbon fiber driveshafts and more. In addition to its motorsports offerings, the company services industrial industries, but it all began in motorsports.

Jim Jordan founded QA1 in 1993 and introduced rod ends and spherical bearings for the performance racing industry. The company quickly became a leader in rod ends, spherical bearings, and custom linkages among other products produced for the motorsports industry.

When the company purchased Hal Shocks five years later, QA1 began producing shock absorbers for Motorsports and later added shocks that were designed to be revalved and rebuilt by teams, saving them time and money. After diversifying its shock absorber offerings over the next several years, the company purchased Carrera Shocks in 2004 making QA1 the No. 1 manufacturer of performance racing shocks in the world. 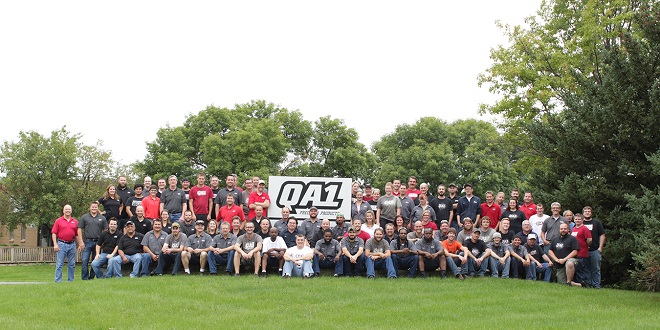 With continued focus on fine-tuning and expanding its product offering of American-made high performance suspension components and carbon fiber driveshafts, QA1 has grown to be a household name in the performance aftermarket.