Continuing our series of stories relating key moments from RACER’s first 25 years, this is the third chapter detailing the development and continuing evolution of RACER.com. This time the story is taken by its executive editor, Andrew Crask.

If nearly 30 years in the motorsports news business has taught me anything, it’s that change is constant, inevitable and ultimately positive – even if the positive aspects can initially be well hidden. This series of articles detailing the history of RACER‘s first 25 years has related countless challenges that had to be to overcome; the best part is, the company has consistently rebounded stronger than before, applying the lessons learned at each step along the way.

I joined RACER from On Track, a bi-weekly racing news journal that was, one might say, the 1980s equivalent of today’s RACER.com, with race reports and news from across the motorsports world, along with features and analysis from some of the top beat reporters in the business. While the superior graphics and editorial sweep of RACER took things to a whole new level in 1992, the magazine’s monthly production cycle made keeping on top of breaking news all but impossible, so the RACEFAX news service was introduced to bridge the gap beween issues. As Bill King related in the last two chapters of this story, that service soon evolved into our first venture into the World Wide Web, RACER.com – and into a internet partnership with the Speedvision channel.

Speedvision’s sale to FOX in 2001 led to its rebranding as SPEED Channel and, although FOX had initially intended to go its own way with the channel’s Web site, RACER was in a position to bring synergies of its own to the table that helped persuade FOX to continue the association. Following RACER‘s sale to UK-based Haymarket, the publishers concluded a deal to share content from Autosport.com in the UK with the rebranded SPEEDtv.com, alongside key contributors from SPEED including Robin Miller and Marshall Pruett.

As SPEED, the channel continued to provide rich levels of motorsports coverage from Formula 1 and Champ Car to ALMS, Grand-Am, SPEED GT (now known as Pirelli World Challenge) and more, while the Web site profited from that exposure and the insights of both the on-air talent and its beat writers. As well, what had initially been an arms-length relationship between SPEED’s base in Charlotte and RACER‘s in California soon evolved into a effective partnership. I was able to see that first hand when I was invited on RACER‘s behalf to join other key members of the SPEEDtv.com creative team to assist in the relaunch of the site for 2008 aimed at improving the user navigation experience through all that wide-ranging content.

Changes, though, continued behind the scenes that would alter that content flow. As corporate owner FOX continued to look for ways to maximize its investment in NASCAR programming and to monetize both the channel and the Web site, non-NASCAR related motorsports programming began to be squeezed out in favor of reality-based content that, whatever one’s view of its merits, had little in common with the channel’s origins. That process inevitably reduced the footprint of RACER on SPEEDtv.com, until the association ended in 2009. SPEED would go on to be transformed into FOX Sports 1 in 2013.

Yet with change, once more came opportunity. As RACER separated from SPEED, a revitalized RACER.com – still augmented by reports and analysis from Autosport – came back online.

Haymarket’s sale of RACER back to its founding owners in March 2012 – and the subsequent sale of the Autosport group of companies into new ownership – brought our content-sharing partnership to a close. But that change, too was a catalyst for growth:

In August 2013, following the shutdown of SPEED, Racer Media & Marketing added Marshall Pruett and Robin Miller – both longtime contributors to RACER magazine – back into the Web site mix, bringing their unique blend of insight, news reporting, reader Q&A and audio/video reports that build on the experiences and lessons learned during the SPEEDtv days and enabling RACER and RACER.com to present a united front. RACER.com has quadrupled its traffic since that time as Autosport-sourced stories have been replaced by our own exclusive reports and analysis from the likes of Will Buxton, Chris Medland, Kelly Crandall, Stephen Kilbey and Richard S. James.

While Autosport alumni remain onboard in Editor-in-Chief Laurence Foster and Editor Mark Glendenning, alongside myself and Associate Editor Alison Sneag, RACER.com is now clearly charting its own course. The site’s record level of traffic for the month of May solidified our position as the top sports media website in the country devoted exclusively to motorsports. Our social media footprint also has expanded significantly, particularly since a new, mobile-friendly site was launched in 2014.

I look forward to seeing what tale the next chapter will tell. 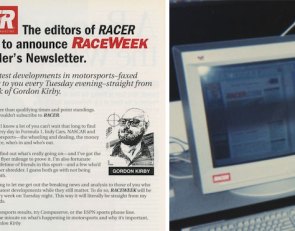