Scuderia Ferrari has graced the cover of RACER Magazine 23 times. Take a look back at Ferrari as presented through 25 years of RACER. 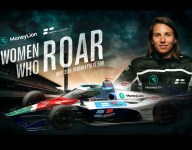