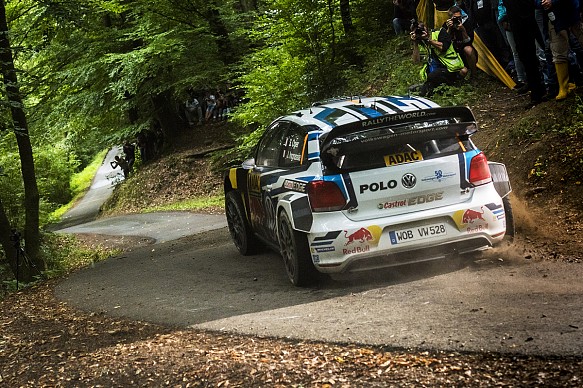 Sebastien Ogier stormed into the Rally Germany lead as the event reached the famous Panzerplatte stages on Saturday morning, before an accident paused proceedings.

The full-length Panzerplatte stage had to be halted after the first seven runners when sixth-placed Citroen driver Stephane Lefebvre went off. The medical crew was required to attend the scene.

Prior to the stoppage, World Rally Championship leader Ogier had taken charge of the close lead battle with Volkswagen teammate Andreas Mikkelsen after repeated place-swapping earlier on.

Friday frontrunner Mikkelsen’s choice of soft tires all round paid off initially when drizzle hit the first two stages. It allowed him first to edge into a five-second lead, then hang on in front – albeit by only 0.2 seconds – despite sliding up a bank and having to reverse when he braked too late on the Bosenberg stage.

Despite being unhappy with the amount of soft tires he had taken for what turned out to be a surprisingly dry stage, Ogier went 13.5s quicker than Mikkelsen. That put him 13.2s clear overall, as Mikkelsen admitted to struggling with the handling his mixed hard/soft tire choice gave him in the conditions.

The Hyundais slipped away from the lead fight through the morning, neither Thierry Neuville nor Dani Sordo completely happy with their cars’ performance and Neuville making a couple of small mistakes. The 2014 rally winner then lost his power steering close to the end of the long Panzerplatte, though he had enough in hand to still keep third place by just 1.6s ahead of Sordo heading for service.

Ott Tanak remains fifth, with Mads Ostberg set to move up to sixth after Lefebvre’s crash but under increasing pressure from Hayden Paddon.