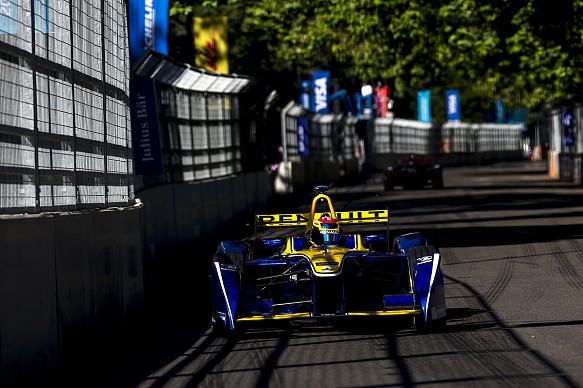 Sebastien Buemi claimed pole position for the final race of the Formula E season in Battersea Park, drawing himself level on points with Lucas di Grassi in the process.

Buemi went even quicker in the superpole shootout, setting a 1m22.033s to clinch pole, and the three points that come with it, by almost a full second ahead of Prost.

Di Grassi will start third, having missed out on lining up alongside his title rival by just 0.027s.

“It’s good to be on the same points as Lucas and starting ahead of him,” said Buemi. “If he [Prost] can do the same job [Daniel] Abt did yesterday that would be good.”

Oliver Turvey made a second consecutive superpole appearance for NEXTEV TCR with an impressive qualifying effort. The British driver will start fourth as he looks to make up for missing out on a first FE podium after crashing out with just over two laps to go on Saturday.

Nick Heidfeld was the fifth superpole contestant but made a mistake at the start of his lap.

Abt, criticised by Buemi for his di Grassi “bodyguard” role in Saturday’s race, will line up sixth, ahead of the two DS Virgin Racing drivers Jean-Eric Vergne and Sam Bird.

Nelson Piquet Jr. and Loic Duval complete the top 10 on the grid.