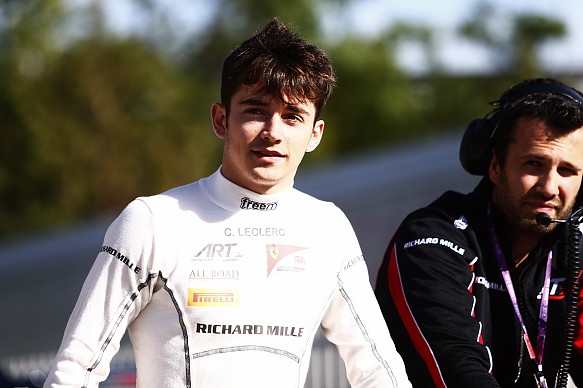 The 18-year-old, who leads the GP3 standings after the opening weekend at Barcelona, was linked to outings with the Ferrari-associated U.S. team earlier this year, and in May he completed the required mileage in a 2014 Ferrari to obtain a Friday superlicense. He will take the place of Esteban Gutierrez for FP1 at the British GP, then make four further appearances in Hungary, Germany, Malaysia and Abu Dhabi.

“Charles is highly regarded by Ferrari and his record speaks for itself,” said Haas team principal Gunther Steiner. “We’re happy to provide this opportunity and help develop the next generation of Formula 1 drivers. Credit also goes to Esteban for sharing his racecar and serving as a mentor to Charles.”

Leclerc added: “This is a fantastic opportunity to get seat time in a Formula 1 car and I can’t thank Haas and Esteban enough. I’m honored by the faith Haas and Ferrari have in me.

“This is an important step toward my ultimate goal of becoming a Formula 1 driver.”