– A light drizzle that slowly increased in intensity greeted racers in the back half of Saturday during the opening round of competition at the SCCA U.S. Majors Tour stop at the Mid-Ohio Sports Car Course in Lexington, Ohio.

While the track started to dampen during the Group 6 race, which featured E Production and GT-Lite racecars, the rain really began to create chaos in Group 7 when the big GT-1, GT-2, GT-3, Touring 1 and American Sedan steeds hit the track. An early spinner kept the Group from receiving the green flag before being pulled into the pits for a long delay. Ultimately, the Group got only a few laps of green flag competition before being lined up behind the pace car to receive the checkered flag. 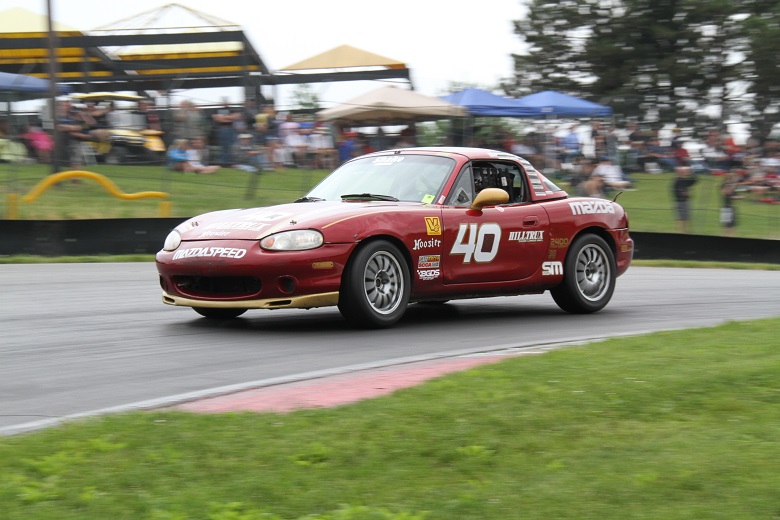 With the rain still coming down, F Production and H Production drivers made their way on course to start their race. The declining conditions caught out pole sitter Eric Prill who gingerly crept off track in his Mazda Miata at the first turn, handing the lead to Kevin Ruck in his Acura Integra. With only six minutes remaining in the event, Ruck gave up the lead to eventual winner Charlie Campbell in a Mazda Miata.
“Really, it was pretty treacherous out there,” Campbell said after the race. “But I got the start right and things just worked out for us in the race. I don’t mind the rain, so it really didn’t bother me.”
Things didn’t improve any for the open-cockpit pilots in Group 9 — consisting of Prototype 1, Prototype 2, Formula 1000, Formula Atlantic, Formula Continental, Formula Enterprise and Formula Mazda vessels — which suffered the same fate as the earlier Group 7 event and had very few laps under the green flag before queuing behind the pace car for a checkered flag.
But while the day’s later racers were mistreated by Mother Nature, some good racing indeed took place earlier Saturday. The Spec Miata challenge, which featured more than 50 cars, had an intense battle ultimately won by Justin Hille.
“The race was great,” Hille said sitting in his car after slipping off his helmet. “Michael Carter got ahead at the beginning, but seemed to be making a few mistakes I was waiting to capitalize on. I was finally able to get around him on the back straight, but I couldn’t create a gap. I ended up defending every lap because I knew if he got by I’d never be able to slip by again.”
Fingers are crossed for better weather Sunday during the SCCA U.S. Majors Tour competition from Mid-Ohio Sports Car Course where 23-lap or 35-min races are scheduled to begin at 8:40am Eastern Time. More information can be found at SCCA.com/majors.