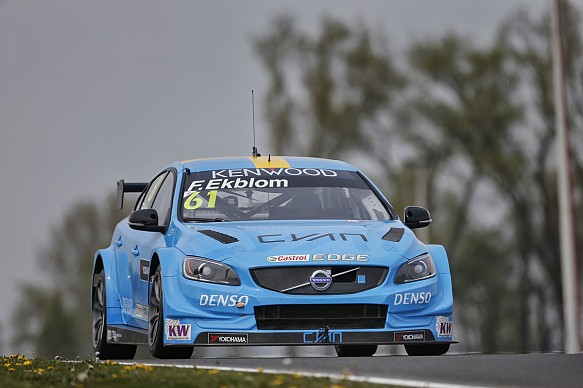 Swede Ekblom produced the fastest time in either of the two sessions in Saturday morning’s first practice, leading a Polestar one-two with a best time of 2m05.420s in his Volvo S60 to eclipse team-mate Thed Bjork by 0.313 seconds.

Catsburg was third-fastest, just 0.030s behind Bjork and ahead of teammate Gabriele Tarquini, but came to a halt in his Lada Vesta out on track towards the end of the session. The Dutchman bounced back in the second session though, posting his fastest time of the day to top the practice two timesheets.

Catsburg’s 2m05.581s was a tenth-and-a-half slower than Ekblom’s pace from first practice but was enough for him to leapfrog both of the Polestar drivers towards the end of the second session, with Bjork second once again, ahead of Ekblom.

Norbert Michelisz was fifth and the leading Honda in first practice and followed that up with the fourth-fastest time in the second session, ahead of the returning James Thompson – who was an impressive fifth in his Munnich Motorsport Chevrolet Cruze.

As had been the case a day earlier in Friday’s testing session, Citroen’s contingent were well down the pecking order.

Tom Chilton in his satellite Citroen C-Elysee registered the best placing for any of the marque’s cars with eighth in second practice, while world champion Jose Maria Lopez was ninth in the first session before finishing the second in 12th.