NXS: Jones capitalizes on late restart to win at Bristol

NXS: Jones capitalizes on late restart to win at Bristol

Jones, the pole winner, restarted fourth on the final restart and charged into second place behind leader Kyle Larson when Busch’s No. 18 Toyota hesitated trying to pick up power in the bottom lane. Larson left the preferred top lane open through Turns 3 and 4 and Jones took advantage, taking the lead from Larson with two laps left.

Busch followed his teammate into second place, but couldn’t keep up with Jones on the final lap, trailing the No. 20 JGR Toyota by .418 seconds at the finish line. The runner-up result ended Busch’s prospects for a record third straight NASCAR weekend sweep.

“We had a really good restart, and Kyle (Larson) just left the top open,” said an elated Jones, who was battling teammate and eventual sixth-place finisher Daniel Suárez for the Dash 4 Cash bonus, a prize available only to drivers competing for the Xfinity Series championship.

Suárez had the misfortune to restart third on the bottom on Lap 198 and got bottled up behind Busch as Jones charged forward in pursuit of Larson. That allowed Austin Dillon to take fourth and Justin Allgaier fifth at the finish.

It’s doubtful Jones could have scripted a more satisfactory ending if he’d written it himself.

“I figured at some point in the year we could get a win when those guys weren’t in the field, but it would be a tall task with them in the field,” said Jones, who picked up his third victory in the series and his first this year.

“Here at Bristol, for those two guys, this is one of their best tracks. I’m just so excited and you can tell – I’m out of breath. I wasn’t working that hard. Just so excited about the win and to be here in Victory Lane and beat those guys. This is a really big day for us.”

Though Jones was the winner, most of the race was a battle for the top spot between Larson, who led 94 laps, and Busch, who led 43.

“The two cars that were the class of the field today didn’t win – oh, well,” Busch said. “It’s a great day for Erik Jones. He certainly stole one today. He didn’t out-race the two Kyles up front, but he certainly did in the final laps that counted.”

Larson spent most of his time in the post-race beating himself up for leaving the top lane open for the opportunistic Jones.

“I just did a really bad job on that restart – really bad,” Larson said. “I knew I gave it away. I’m really disappointed in myself. I just ran half a groove too low through (Turns) 3 and 4.”

The two 50-lap heat races produced a pair of wire-to-wire winners, Jones and Austin Dillon, and no cautions. But the heats did establish the starting order for the 200-lap main event, as well as identify the four eligible Dash 4 Cash competitors.

Any driver who wins two of the four Dash 4 Cash bonuses qualifies for the Chase, but as the first Xfinity regular to win a race this year, Jones won’t need the extra help. 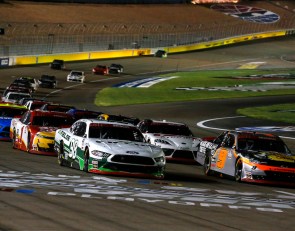