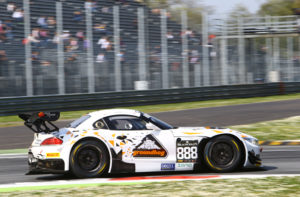 The Triple Eight BMW squad is returning to the Blancpain Sprint Series at Brands Hatch this weekend.

Triple Eight Racing will field a solo BMW Z4 for Joe Osborne and Lee Mowle in the Pro-Am class of the BSS in order for the duo to gain experience of the Brands Hatch Grand Prix Circuit ahead of the British GT Championship round on the track in August.

The team had looked at mounting a full BSS campaign after taking in last year’s series finale on the Baku street circuit in Azerbaijan, but opted to focus on the Blancpain Endurance Series instead.

“It’s a great package we have here,” Osborne said. “Lee is quick and not unfamiliar with the track, so you’ve got to think we’ll be able to go for the class win, despite the big international names we’re up against.”

Triple Eight’s participation at Brands means the BSS entry list remains at 19 cars in the absence of the Fach Auto Tech Porsche squad.

Antonio Hermann’s BMW Team Brazil, winner of the main race at last month’s Nogaro opener with on-loan factory stars Maxime Martin and Dirk Muller, will have its regular driver lineup for the first time in the BSS.

Caca Bueno and Serigo Jimenez, and Valdeno Brito and Atila Abreu take part at Brands after being unable to race in France courtesy of a clashing round of the Brazilian Stock Car Championship.

DTM legend Bernd Schneider’s participation has been confirmed in one of the GT Russian Team’s Mercedes-Benz SLS AMGs alongside Alexey Karachev.

Marko Asmer takes up his seat in the team’s lead Merc partnering Alexey Vasilyev, which was filled by Christophe Bouchut when the Estonian was unavailable for Nogaro.