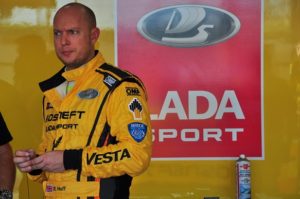 Lada driver Rob Huff called the performance of the new Vesta a “genuine surprise” after going quickest in first qualifying at the World Touring Car Championship opener in Argentina.

Changing track conditions, caused by increasing ambient temperatures and several races from the national series sharing the bill, made for slower times in qualifying than during the morning’s second practice session.

As the factory Citroens struggled in the early part of Q1 Huff went fastest of all, outpacing Mehdi Bennani’s semi-works C-Elysee by 0.162s. Although Huff’s car developed a misfire and he slumped to 11th place in Q2 as the Citroens regrouped, teammate Thompson will start from pole position in race two after setting the 10th fastest Q2 time.

“The first [qualifying] run we did was on old tires, and that was good for P5,” Huff told AUTOSPORT. “And that was good enough for us to go be in the top 12 and go into Q2, but we wanted to run on new tires to see what we could find – it’s only the third or fourth time we’ve put new tires on the car because we’re still learning about it.

“We had the tires so we may as well put them on, so we did, and I went P1. I think we shocked everyone, including ourselves, because we know nothing about this car – we’ve done three half test days at Magny-Cours.”

The 2012 world champion said the qualifying pace had eased concerns that the Vesta’s late introduction had given him about the marque’s potential to fight the all-conquering Citroens.

“I think today we’ve learned more about the car than we did at Magny-Cours,” said Huff. “This morning we were struggling a bit with setup but in the second practice session we really started to get somewhere.

“OK, the car wasn’t capable of doing a 1m45s [in those conditions] but the low 46s were possible, and if you look at the times we could have been P3 or P4. I’m genuinely impressed with this car – right from the moment we took it off the transporter people have been looking at it, and thinking ‘this is serious’.

“I wasn’t convinced before that we could take the fight to Citroen, but now I am – we’ve got a hell of a car. Give us six races and a bit more testing and you’ll see what we can do.”