Michael Conti captured the 2014 NASCAR PEAK Antifreeze Series Powered by iRacing.com and the $10,000 champion’s purse last night at iRacing’s Homestead-Miami Speedway, holding off Ray Alfalla’s late-season charge and capping a tremendous season in which he notched a series-leading three wins and 10 top-five finishes in 16 races. Remarkably, at just 17 years of age, Conti is on top of the oval sim racing world and has put his name alongside the greats like former champions Alfalla, Richard Towler and Tyler Hudson.

Conti won the pole and hung around the front all race long despite not having the fastest car. Alfalla, who began the night 13 points out the series lead, was about the same speed as Conti for much of the race. But with Conti never falling more than a position behind him, the two time champion had little hope of gaining ground in the title chase.

Neither championship contender had anything for Kenny Humpe, who dominated the season finale. Humpe started third and quickly moved to the lead on his way to pacing the field for 124 of 167 laps. Conti later regained the lead during a pit stop sequence, the only other driver to lead, but even the soon-to-be champion had nothing for Humpe.

Humpe became the fourth driver to win multiple races in the 2014 NASCAR PEAK Antifreeze Series after winning the season opener at Daytona. Chad Laughton came home in the runner-up position with Conti and Alfalla following in third and fourth. Kevin King made a surprise return to the series after several weeks off and rounded-out the top five.

Daytona victor Humpe scored a dominant win at Homestead to bookend the season.

Going into the race Conti’s game plan was to simply keep Alfalla in sight, knowing his 13 point margin gave him some wiggle room if needed. With fuel mileage taken out of the picture by yellows, Conti looked to have everything wrapped-up before a caution with just 11 laps remaining provided one last plot twist to the season.

Conti had a decision to make: Stay out on old tires and hope many cars behind him choose to do the same, or pit for fresh rubber and hope to drag most of the field in with him. This decision was even more difficult since Alfalla was behind him in the running order, meaning he could not simply adhere to the conservative strategy of mirroring his rival’s move.

Alfalla raced Conti hard and clean all night, but fell short on the track and in the standings.

Conti chose to stay out and keep his track position. Most of the top 15 runners (including Alfalla) followed suit, which looked to seal Conti’s fate barring a disaster on the restart.

The green flew with eight laps to go and Conti quickly found a safe place to run as the field battled behind him. Of course, Conti was hoping to go green to the finish but he would have no such luck as a crash near the back of the field brought out the yellow just three laps later and set up a one lap dash for the finish.

The two championship leaders came to the final restart of the season nose-to-tail with Conti third and Alfalla fifth. When the green flew Conti played it ultra-conservative, trying to avoid wheelspin, and succeeded in making a clean start which carried him around the final lap to the checkers.

Conti started on pole and was the only driver other than Humpe to lead the race.

The final margin of victory in the championship was 15 points, which has to be disappointing for Alfalla after gaining so much ground on Conti in the second half of the season. That said, with two titles and two runner-up finishes in five seasons, the Floridian could surely hold his head high following last night’s race.

Nick Ottinger, who came to Homestead with an outside chance at the series title, finished third in the points, dropping to 41 points back of the lead after a subpar stretch run exemplified by last night’s subdued eighth place finish. Laughton took home $1000 for fourth in the standings while Jake Stergios capped-off a solid season with a fifth in the championship, beating Chris Overland by just two points for the last spot in the money. The rest of the series top ten finishers included Matt Bussa, Cody Byus, Adam Gilliland and Justin Bolton. None of these four made a visit to victory lane in 2014 but all drove smartly, kept their noses clean, and were rewarded with solid results.

As for the battle for last of the automatic berths in the 2015 NASCAR PEAK Antifreeze Series, Michael Johnson beat Peter Bennett by two points to secure the twentieth and final transfer position. Everyone below this mark, including former series front-runners Brian Schoenburg, Brad Davies, King and more will have to race their way back into the series next year through the NASCAR iRacing Pro Series.

These drivers will have their opportunity to shine but, for now, the spotlight focuses on Michael Conti. All of the statistics point to his dominance of the 2014 season: 601 laps led, 238 more than any other driver. Most wins (three), most top fives (10) and tied for most poles (four) . . . the list goes on. He runs well on every type of race track and considering his age, one could say he has not even entered his prime yet . . . a scary thought for the rest of the field.

Winning iRacing’s pinnacle stock car title is a tremendous accomplishment but, if history is any guide, successfully defending that title is an even greater challenge. If anyone is up to that challenge it is Michael Conti, your 2014 NASCAR PEAK Antifreeze Series champion. 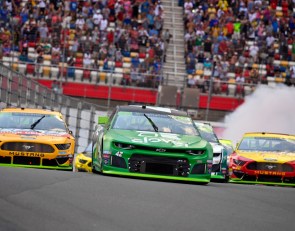