The FIA has drafted in a team of sound experts to help it ensure that changes to make Formula 1’s car noisier are successful.

Mercedes is set to test a new exhaust “trumpet” during the final day of Barcelona testing on Wednesday, but other options to improve the situation are still being evaluated. In a bid to ensure F1 gets it right with any tweaks to the sound, the FIA has confirmed that it has tasked sound specialists to help it make progress.

“The FIA have engaged a team of acoustic engineers in order to ensure measurements are made both with the current exhaust and any development system during the test,” explained a spokesman for the governing body. “Once we have the complete results of these tests, and a full analysis of all available noise sources, we will discuss them with the teams and, where necessary, changes to the rules will be proposed.”

Even if the Mercedes test proves successful in delivering a sound that will keep the critics happy, it is unlikely that the changes will be introduced to the cars imminently. A final version of the trumpet would need to be made, and then other teams would likely demand it be tested on their cars to ensure that it did not affect their competiveness. That means any changes are unlikely until after the next in-season test, which takes place following the British Grand Prix.

Furthermore, the kind of exhaust tweak that Mercedes is trying is not allowed under the current regulations, so a rule change would be needed for it to be raced. This would require unanimous support from the teams so it could be put to the FIA’s World Motor Sport Council.

The FIA spokesman added: “The outcome of the test will be discussed with the teams once we know what changes may be necessary to achieve the desired results. The timeframe would be entirely dependent upon what might need to be changed on the cars to accommodate any new parts.” 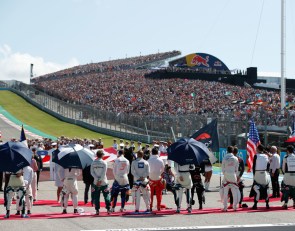