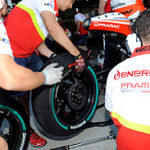 Bridgestone has promised not to let its MotoGP development efforts slip despite announcing that it will leave the championship after 2015.

The Japanese tire firm revealed prior to last weekend’s Spanish Grand Prix that it was ending its stint as MotoGP’s control supplier, which began in 2009 following the departure of its last remaining tire war rival Michelin.

Masao Azuma, chief engineer in Bridgestone’s motorsport development arm, reassured MotoGP riders that his firm would not be taking its eye off the ball despite its impending exit.

“We will still continue to develop new technologies as we want to leave the championship at the end of next season in the best way possible,” he said. “It is in our interest to keep our development program going strong right until the end of our tenure in MotoGP, as there is still a lot for us to learn that we can then migrate to our range of motorcycle road tires.”

He promised front tire revisions would come on stream during the 2014 season.

“We are currently developing new advances in technology, particularly for the front tire that we will be providing to teams for testing purposes in the coming months,” said Azuma. “People can expect to see some state-of-the-art tire technology being introduced to the MotoGP championship over the next 18 months.”

MotoGP immediately opened a three-week tender for a new tire supplier when news of Bridgestone’s departure broke. The series has set a deadline of May 22 for proposals.