The Week In IndyCar, Sept 16, with Colton Herta

Alan Wilson (BELOW) has designed racetracks all over the world and his latest, NOLA outside of New Orleans, is in IndyCar’s gunsights for a race, beginning in 2015 if all the details can be worked out. He’s stayed in touch with me during the past few months and he’s been kind enough to share his thoughts about the track with the RACER.com audience. -Robin Miller. 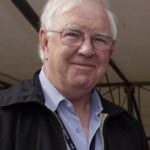 Needless to say the announcement has brought forth the usual critics, complainers and know-everythings, which is very unfortunate because the preponderance of critics of IndyCar like these over the years has done nothing but hurt the series.

While I have had absolutely nothing to do with the plan to bring IndyCar to NOLA, and have no idea what “upgrades” are planned by either IndyCar or NOLA itself, I would like to clarify a few things.

1. The track is flat for the very simple reason that it stands on very poor soil with a water table that is around 4ft below the surface. This prevents any additional weight being placed on the surface or else the entire track would start to subside. Hence no additional elevation or any ability to go lower. The owner, Dr. Laney Chouest, invented his own system of stabilizing the soil which has resulted in a very stable surface, and which, incidentally has the potential to enable significant future development in the marsh areas around New Orleans which has great economic benefit potential for the community.

2. Flat tracks may not have the character of those with elevation but there are many such courses around the world, some of which, like Cleveland and Silverstone have provided great racing. Get over it – flat works in its own way, especially when it enables 100% sightlines like NOLA.

3. The facility is already very well developed. Those who criticize NOLA for not being developed enough have very obviously never been there. If they want to be a critic they should get their facts right. The buildings are outstanding and are at least as good, or better than any other at any racetrack in the USA, including Miller and Barber. The Corporate Center is very special and will play a crucial role in hosting the media and the event’s prime corporate customers. The paddocks are large enough for all teams and support race competitors.

4. The Auto-X area provides close-in and sufficient parking for VIPs and the media.

5. The kart complex (which allows use of two simultaneous courses) is extremely convenient and was host to the Rotax World Championships in 2013, and is the only fully CIK-sanctioned track in the USA. It will provide great fun for spectators with more than 60 rental karts available.

6. The track was not planned or developed as a spectator-events track. The north track was laid out primarily as a driving track for members and regional competitors, with a future, FIA2-standard race course planned on the south side of the paddock. I assume that this will eventually be built when the initial investment has been covered and the market grows sufficiently to support it.

7. In the meantime the 2.75-mile north track should meet all FIA2 safety standards with regard to safety, pit lane, and other features. It may require a few lengths of debris fence (which will be built correctly when it is installed), and some low cost adjustments to the pit-in and pit exit. Note that the current pit-in has a very tight entrance in order to slow non-professional participants down and ensure pit lane safety, while the pit-out needs to be clearly marked and controlled by corner workers. It is not unsafe, but was laid out as is in order to accommodate the future track addition to the south.

8. The track is wide, ranging from 40ft minimum to 50 feet at the entrance to key corners to enhance overtaking and has provided excellent racing so far. It is well liked by drivers of powerful DP cars who have tested there on many occasions.. Turns 5 to 8 may be the fastest turns in North American road racing, while the Turn 8-12 complex is very challenging and surprisingly fast (close to 100mph in a Mustang on entrance and 80mph through the sweepers. The Indy cars will be spectacular to watch there. Turns 13 to 16 are extremely complex and offer multiple lines and brute force overtaking potential. The pit straight is more than 3300ft ending in a sharp right hander with plenty of run-off along the extension of the straight.

9. The whole safety plan for NOLA was to provide the widest possible, smooth grassed run-off areas (some corners have paved run-off pads and gravel traps). This was to enable non-pro drivers in fast cars to have their inevitable incidents without damaging themselves or their cars. The toilets are first class so they can change their underwear and get back on track.

10. For the IndyCar race the facility needs to be treated like a temporary facility, for which it is perfectly suitable. There is space for well over 100,000 grandstand seats along the north edge, with some parking available behind these along the edge of the canal. These stands will provide 100% sight lines of the entire course. Access is possible along the canal from Nicolle Boulevard, avoiding the main entrance to the paddocks. Additional port-johns can be added, although there is already underground sewer infrastructure along the grandstand lines, so permanent toilets could be built.

11. The major spectator parking will need to be off site. However this is already done for the PGA golf course across the road and has worked extremely well, for very large crowds, for many years.

12. There are inevitable some downsides, the most notable being drainage during major rainstorms. Due to the high water table and flat surfaces, drainage is not the best, so a really wet race may result in delays.

NOLA will make an outstanding venue for IndyCar as it reaches out to new markets. New Orleans is already a great events city and is very attractive to companies seeking convention and corporate entertainment venues. The track is just 20 minutes (mostly by freeway or double carriageway major roads) from the French Quarter and all the downtown hotels. There are also plenty of lower cost hotels much closer to the track. As such, it may be the most convenient permanent race facility in North America.

So, with respect to those who rush to judgment about NOLA and a potential IndyCar success, please consider Barber.

When first used by bikes. Some riders and media claimed that overtaking would be impossible, yet, in the words of several of the AMA Championship riders, at the first AMA event there was “more overtaking than during the rest of the season put together.” When first used by IndyCar some drivers complained about its narrow track, which just happened to be as wide (at 45ft) or wider than any other road course in the USA! Critics complained that its location in NASCAR land would limit its success and others claimed that IndyCar races would be boring. Time has told a different story and will undoubtedly do the same at NOLA.

So I ask those who rush to judgment to give Andretti and NOLA a chance to develop the New Orleans IndyCar event into a major addition to the schedule, one that will help the series prosper and draw new fans and sponsors to the sport.