IMSA: Coyote closing in on debut of new DP bodywork

IMSA: Coyote closing in on debut of new DP bodywork

Coyote Cars is drawing closer to bringing the custom, Gen3 bodywork for its Daytona Prototype to market, according to Gary Nelson, who oversees the constructor’s activities.

Nelson, who also heads the Action Express Racing DP team, saw AXR drive its Corvette-bodied Coyote chassis into Victory Lane at last month’s Rolex 24 at Daytona, and has set the manufacturer’s sights on getting its custom body ready to race by March.

Designed by England’s Delta Motorsport, the Coyote DP body would give its customers a chance to use something other than the Corvette-branded body that currently adorns all of its cars.

“As you know I wear two hats: one is Coyote and one is Action Express, and for this offseason, my plan was to wear my Coyote hat more than I ended up wearing it; I was on constant duty with Action Express,” Nelson told RACER. “So when you put it in perspective, we didn’t have any orders for new cars which the new bodywork was meant for, and we had a deadline to get to Daytona for the 24 Hours.

“So leaving Daytona, our plan is to have the bodywork just before or just after Sebring for testing. If the phone rings right away and somebody wants to buy it, then we’ll be able to race at Sebring if we need to. When we laid out the map on what we wanted to do for testing it and IMSA’s approval process, it had us on a rushed pace, and I didn’t want to do that, so it’s pushed everything to February. I wish we could have got both projects done [for Daytona], but the Action Express project had to be number one for the offseason.” 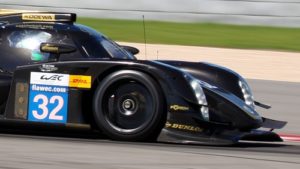 Although Nelson is not quite ready to reveal images of the body to the public, a sneak peek showed the design features tall, rakish front wheel arches reminiscent of the Lotus T128 P2 car (LEFT), and heavily downward sloping sidepods, similar to the Onroak Morgan P2 chassis (BELOW LEFT).

AXR ran a second car at the Rolex 24 in partnership with Delta Motorsport. The No. 9 Millennium-sponsored DP finished third, and could appear at future rounds, but those plans are still being sorted between Coyote, AXR and Delta.

For now, manufacturing the new Gen3 Coyote body is Nelson’s primary focus, and like the chassis, he says the carbon fiber shell and associated components will be made in America.

“We don’t have composite shops of our own with Coyote, but I’m very big on the Coyote being an American-produced car,” he confirmed. “We needed to go to England to get the latest CFD work and design done, and I’m good with that because that’s a resource we didn’t have; but as soon as we can, we’ll bring everything back to America. All the patterns and molds and parts are being built right now in the U.S.”

Rather than task one company with the entire manufacturing contract, Nelson has spread the work among a few vendors.

“Because of the schedule and 40-some individual pieces that have to be made of carbon, we couldn’t dump 40 on one composite shop and expect to have it done in time,” he said. “Crawford Composites is one that we use a lot. Fiberworks in North Carolina, Five Star in Wisconsin… I’m really big on making sure that Coyote that can carry the American flag with what we manufacture.”

Once Coyote’s bespoke body emerges, it will mark the fourth unique shape within the DP ranks, following the Corvette DP, Ford’s generic body for its EcoBoost turbos and Riley’s generic body (ABOVE). It’s also believed the Coyote body could be fitted to Rileys in place of their generic shells.