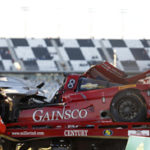 IMSA, sanctioning body for the TUDOR United SportsCar Championship, is currently conducting a post-event crash investigation with the Corvette DP driven by Memo Gidley and the Ferrari F458 piloted by Matteo Malucelli.

According to Scot Elkins, IMSA’s vice president of competition and technical regulations, both cars were impounded by IMSA after the crash that took place on Saturday during the Rolex 24 at Daytona, and have been transported to North Carolina for inspection at NASCAR’s R&D facility.

“We took possession of the cars and brought them to the Research & Development facility in Concord to have our NASCAR safety guys look at everything, do some measurements, photograph everything, record what happened, and then we’ll utilize that data to look at what changes we can or can’t make going forward,” Elkins told RACER. “That’s why we took both cars.”

Information from the cars’ data loggers will also be used in the investigation, helping IMSA to quantify the speeds and g-forces that went into and through both vehicles and their drivers.

“It’s all a bit of a new process for me because I’m just starting to work with the guys at the R&D center, so we’re not so much trying to do a full accident recreation, but we are trying to see if everything did what it was designed to do and part of that is looking through the data to get an understanding of what was experienced,” Elkins added.

“This is my first time going through this [with the NASCAR-owned IMSA organization] process, so we’re working through the best ways to do things and trying to learn from everything. We got the cars to the center on Monday and started the process [on Tuesday]. We should have some results very soon.”

One of the most pressing questions surrounding the devastating crash and damage that took place with Gidley’s No. 99 GAINSCO/Bob Stallings Racing Corvette DP centers on crash testing data for the tubeframe chassis.

Changes to the front of the “Gen3” DPs were also carried out, with new noses, radiators and ducting installed to fit Corvette-branded bodywork, along with Ford- and generic-themed bodies from Riley. It’s unclear whether the Gen3 chassis or the significantly altered Gen3 components ahead of the front bulkhead have undergone a new round of crash testing.

“DPs have been in existence for quite some time and I know the roll cage construction is based on the NASCAR [roll cage] model,” Elkins explained. “I know while I’ve been here in the last year, we haven’t done any crash testing on those cars. The majority of the cars are all relatively new because of the Gen3 modifications they had to do. The Ferrari was a GTE car and has an ACO-spec roll cage in it.”

“Crash testing isn’t required, but the chassis specs, the roll cage and the radiator placement are,” said Riley. “The bulkhead placement and the dimension of the roll cage are spec, and that’s what determines how strong the cars are.”

Compared to the ACO-based P2 cars competing in the TUDOR Championship’s Prototype class (BELOW), DP’s lack a dedicated front crash structure mounted to the bulkhead. DP’s have relied on the carbon fiber nose, splitter and associated cooling components to serve as a deformable structure in a head-on impact.

Part of what Elkins hopes to gain from the crash investigation is whether the Corvette DP’s front componentry did its job sufficiently, or whether the addition of a crash box would make for a worthy addition. Based on the findings, look for the results to also be applied to IMSA’s new prototype specifications that are due in 2017.

“Your curiosity is the same as ours,” Elkins noted. “That’s why we sent the cars to the R&D facility. If adding a crash structure would be beneficial to the DPs, that’s exactly what we’re hoping to learn. That’s the whole purpose. We also want to learn these things to build data for the specs of the 2017 car.”

Asked if it would be possible to reconfigure DPs to P2-style side-mount radiators in order to make space for a front crash structure during the 2014 season, Riley says it would be a tall order. He also questions whether it would be necessary.

“It would be too big of a task,” he remarked. “In general, the radiators got moved to the side [of P2 cars] to pass the FIA crash tests based on the way it’s worded. If you remember, the Group C and GTP cars all ran with front radiators, so it’s not a new idea. It would be too much of a rework to do that in DP right now, and from a DP rules standpoint, I don’t know how much would be gained. If you were in a DP or a P2 car, which one would you have rather been in during that accident?”

Whatever comes from the investigation, GM racing director Mark Kent tells RACER the manufacturer’s safety experts will be made available to IMSA if a decision is made to bolster the safety provisions required on the DP chassis.

“Safety has always been our number one priority, and if we’re called upon to work with IMSA, we’ll gladly do so,” said Kent. “It was really unfortunate with what happened to Memo and for the entire Stallings organization that we think so highly of.

“We did the same working with the NHRA in the Pro Stock class to improve safety there, for example, and we’d be glad to help IMSA if asked to do so.”