INSIGHT: what the VJM07 reveals

INSIGHT: what the VJM07 reveals

Force India’s 3D rendering of its new VJM07 Formula 1 car, released on Wednesday, sheds some light on 2014 designs while hiding much of the real detail. Craig Scarborough analyzes what we can learn from the image. 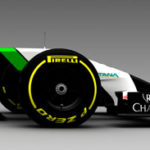 We can deduce that Force India has followed the so called “finger” or “anteater” nose design. This is where the new rules demand a low nose tip, so the nosecone ends up with a finger-like extension that reaches down to meet the mandatory 185mm nose tip height. But the final design appears to be sleeker than expectations, with the finger merged into the wedge-shaped upper nose.

The front wing is also mounted to the finger extension and not the upper nose section.

Despite the sleeker design, the result is still likely to look startling at first. It is worth noting the team has painted the finger extension black to blend into the new black-based livery.

Another design feature likely to be common across the grid is the stepped chassis. This is where the rules mount the front bulkhead 10cm lower down to help align with the lower nose tip.

As the aerodynamicists want the chassis as high as possible to send more air to the rear of the car, the bulkhead is down at the lower height, but rises back up 10cm to create a high flat top to the front of the chassis. The resulting step is cleaned up with a vanity panel.

Now fitted with a Mercedes 1.6-litre V6 turbo and enhanced Energy Recovery Systems, the Force India has a far greater cooling demand, although the sidepods from this angle do not look disproportionately large.

Perhaps aiding the size of the sidepods is an additional inlet over the roll hoop. This probably feeds an oil cooler for the gearbox.

One detail that is clearly apparent is the size of the fuel tank. With 100kg of fuel for the race the tank only needs to hold two-thirds of last year’s capacity.

The split lines on the bodywork around the roll hoop suggest the team has dramatically shortened the length of the monocoque in this area.

As the 2014 rules demand a single, central exhaust outlet, the sidepods have lost their Coanda exhaust outlets. This makes the coke bottle shape of the bodywork much slimmer.

The exhaust now exits out of the tail of the engine cover, roughly in line with the join in the green and black colored panels of the tail.

Rear wings are trimmed for 2014 with no beam wing and a slightly shallower top rear wing.

Although none of the wing detail can be seen, the team has added more slots in the vertical leading edge of the endplate, which aids airflow through the rear wing for more downforce.

Another feature not evident in the picture is the means of mounting the rear wing to the chassis.

The loss of the beam wing means the wing can be either mounted to the diffuser or supported on a pylon. The latter option does not appear to be on the car at this image.