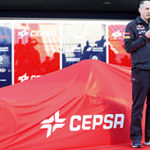 Toro Rosso will unveil its new Formula 1 car at Jerez a day before the start of pre-season testing, it announced on Friday.

The Faenza-based squad said it will launch its new STR9 on January 27th at the Spanish circuit.

Toro Rosso is switching to Renault engines for this season, having used Ferrari units for seven consecutive years.