FIA race director Charlie Whiting has defended the use of the DRS in Formula 1 amid criticism that it makes it too easy to overtake.

The DRS, which allows a driver to open a slot gap in the rear wing to slash drag, was introduced in 2011 and Whiting does not believe it diminishes the skill of passing.

“I’m a great fan of it,” said Whiting. “I know some people are opposed to it and really think it is not pure enough. I completely disagree with that view.

“It still requires extreme skill from the driver. It is not as if it’s turn on, overtake, go, done.”

Whiting stressed that sometimes passing moves appear easier than they actually are because of the advantage of a better exit speed from the corner leading onto the straight.

Passing moves on the Kemmel Straight at Spa have been criticized in recent years, but Whiting used this as an example of the advantage of a strong run through a turn.

“Sometimes it does appear like that [too easy] but Spa is an example of how if you come through Eau Rouge a bit quicker than the car in front and deploy DRS it’s dead simple. But it’s only because of the exit speed of the car. If the cars are at an equal speed, a driver will have to be within three tenths of a second of the car in front, which is no mean feat in itself.

“But if they are at the same speed at the beginning of the DRS zone, they will be alongside at the braking point. That’s the whole theory of the DRS.

“You have to pre-suppose that the cars are at the same speed but you have no idea what speed they are going to do that. If you understand the reasoning about it and what is required to actually overtake, it still takes a great deal from the driver.”

NO PLANS TO CHANGE DRS RULES

Whiting added that there are no plans to change the way that the DRS is used. Currently, there are usually two set DRS deployment zones that can be used throughout practice and qualifying, but only in a race when within one second of the car in front at the preceding detection point. 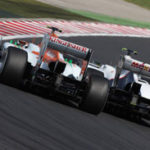 “We feel it should be allowed only on certain parts of the track,” said Whiting when asked if it was possible the DRS could be changed to be used for a set amount of time in a race, as in Formula Renault 3.5.

“Before last year, drivers could use it at any time they wish in practice and qualifying and that led to a couple of incidents where drivers used it too early so for last year we only allowed them to use it in practice here they can use it in the race.

“We think it is important only to be used in certain areas, not for a maximum amount of time.”