With an explosion of cars and their associated technical regulations to handle, RACER has learned IMSA is searching to fill a newly-opened position that would add to the sanctioning body’s modest full-time staff.

“On the tech side, we’ve got 11 people plus Charlie Cook, who’s the technical manager for the TUDOR Championship, and all of those people are fly-in people, other than Charlie, who’s full-time, but all the other folks are only in for the events so we have consistency,” said IMSA VP of competition and technical regulations Scot Elkins.

“Those 11 people comprise a mixture of ex-Grand Am folks and ex-ALMS folks and now we’re looking to hire a technical director to help myself and Charlie out to kind of oversee all of the technical aspects of the business. Basically, we’re looking to add some staff because of the number of cars and amount of procedural things we have to deal with.”

Elkins also works with full-time team members like Paul Walter, IMSA’s race director, and Gary Cummings, the series manager, but IMSA’s specific need involves staffing the technical department. And with IMSA VP of racing operations Richard Buck set to move to NASCAR after the Rolex 24 At Daytona, Elkins will lose another ally.

For now, and with the Rolex 24 almost here, the series will continue to work with its existing tech team to process all of the cars on-site before expanding the department after the season opener concludes.
“We’re utilizing the ALMS tech process, which is a three-stage process with the hydraulic lift and the other, longer tech procedures that we’ve used,” Elkins added. “It gives us an opportunity to look at things that haven’t been looked at before on some of the DPs and whatnot. So it’s a lot of work and it requires… We take about 15 to 20 minutes per car to do tech. So what it does is it adds some time for the teams but it’s something that all the teams have asked for to have that thoroughness and consistency in the technical inspection process.” 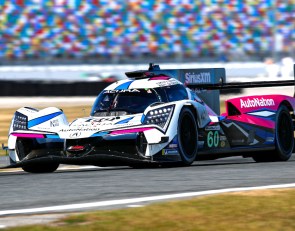