After securing the 2013 IMSA Continental Tire Sports Car Challenge Team and Driver Championships, Burton Racing will look for another strong season as the team is set return to IMSA competition in 2014 with a two-car lineup.

Terry Borcheller and Mike LaMarra to share the driving duties in the No. 23 Burton Racing BMW 128i machine as the duo look to stage a successful championship defense in 2014. Joining them to co-drive the No. 22 Burton Racing BMW 128i will be Connor Bloum and Greg Strelzoff. The duo raced together in CTSCC ST-Class competition last season, scoring three podium finishes behind the wheel of a BMW 328i.

Burton Racing is steered by Keith Burton, who first started the team in 2007 after he worked his way up in the sport after first starting as a mechanic in the open-wheel ranks. The team will already have a head start on the 2014 season after completing a successful test last week at Road Atlanta, which will play host to the season-ending race in October.

“When I started this team, I focused on having the right people in the right place to build a championship-winning organization,” said Keith Burton. “So it was very gratifying to have the results that we did last year. But now, we have a new challenge to come back as champions and deliver that same kind of performance. We are very excited about that challenge. Having Connor and Greg join us this year and Mike and Terry coming back again is a great opportunity for everyone involved.”

The opening round of the 12-race championship will take place at Daytona International Speedway as part of the big season-opening Rolex 24 At Daytona event. 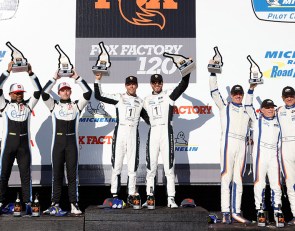