With the start of the 2014 SCCA Club Racing calendar set to start in January, contingency programs for competitors participating in the SCCA U.S. Majors Tour and Regional racing programs have been announced. 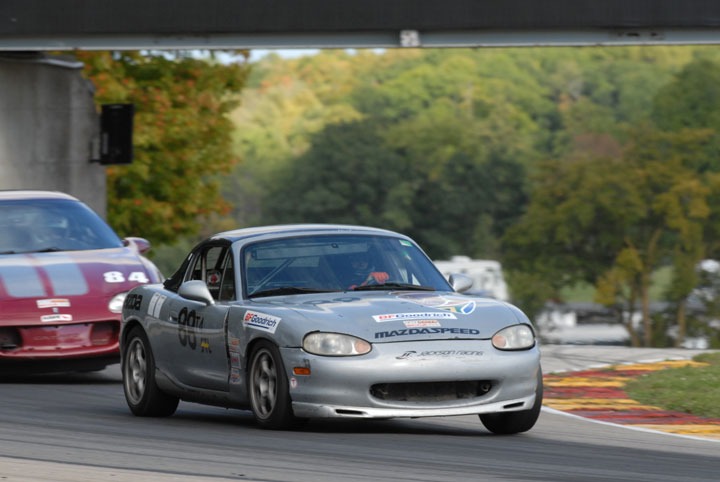 Seven auto manufacturers will be offering cash prizes based on finishing position for the SCCA U.S. Majors Tour Mazda North American Operations, Ford Racing, Honda Performance Development, Toyota/TRD, Scion Racing, Nissan Motorsports and MINI USA. Many of these auto makers will have payouts for racers at the Regional racing level, as well.
Mazda, the Official Vehicle of SCCA, will offer awards to the top three finishers in the eligible classes. Race winners in Spec Miata will earn $600, while second-place receives $350, followed by $175 for third. The remaining classes will have a similar pay schedule, with a change in the dollar amount to $800, $500 and $250, respectively. Additionally, a $1,750 bonus will be added for a Conference Championship. The Regional award program will award the Divisional point leaders, with $500, $300 and $150 being awarded to the top three positions in that order at the end of the season.
Honda will, once again, support racers competing under their banner, as well as that of Acura, in selected classes in Majors and Regional competition. Selected models can earn up to $500 for a Majors win, while winners in all other vehicles supported by the brand can earn up to $200 for a Majors win. At the Regional level, select IT-class podium finishers can cash-in on manufacturer awards at the American Road Race of Champions event.
Nissan Motorsports will also be offering payouts for podium finishers in the Majors Tour. In addition, MINI USA, Scion Racing and Toyota/TRD will also be supporting their customers with per race contingency support in both the Majors and Regional racing programs for 2014. Toyota’s program is limited to Regional Runoffs-qualifying races, while MINI and Scion will apply to all Regional events. Ford Racing will support Club Racing, with details on its program to be announced at a later date.
BFGoodrich Tires, the Official Street Tire of SCCA and sponsor of the BFGoodrich Tires Super Tour, is joined by Hoosier Racing Tire, Hankook Tire and Kumho Tires in the category for contingency.
BFGoodrich Tires will award two tires to Majors race winners sporting the brand and one tire to the runner up in eligible classes. A one-tire bonus will be given out at each of the BFGoodrich Tires Super Tour events.
At Majors events, Hoosier will provide a complete set of four tires to a Spec Miata race winner, with second earning two tires and one free tire going to drivers in places third through eighth. In all other eligible classes, a Majors winner can earn two tires, with second place earning one tire. Additionally, Hoosier will be the spec tire for the Regional-level Spec Miata class. As such, eligible winners in any Regional event will earn two free tires with the second-place driver earning one tire. The SM Divisional Champions will also win a complete set of new tires.
Kumho will offer awards to Regional racers in 2014 in the form of product credits, at $150, $100 and $75 for the top three, respectively. Hankook will also post a program with details to be announced in the near future.
Hawk Performance and Carbotech Brakes have also stepped up to support the Majors Tour by awarding top finishers in eligible classes.
Hawk Performance, the Official Brake Products of SCCA, is in the process of finalizing its program. Details will be announced as soon as they are available.
Carbotech will provide certificates to podium finishers fulfilling the eligibility requirements in the amount of $100, $75 and $50.
SafeRacer, the Official Safety Provider of SCCA, has returned to support SCCA Majors racing by offering a $500 certificate to the nation-wide points champion in all classes. Summit Racing Equipment will be offering certificates of $100 and $50 to the top two finishers at all Majors races.
GoPro, the Official Camera of SCCA, will be giving a HERO3 camera to one driver at each SCCA BFGoodrich Tires Super Tour event for having the “GoPro Hero Moment” of the weekend.
Details on all contingency programs and how to register for these programs can be found at http://www.scca.com/clubracing/content.cfm?cid=44474. Drivers should read the program requirements carefully and be sure to have the necessary paperwork submitted before their first event.
As new Club Racing contingency programs become available, they will be posted to http://www.scca.com.