EXCLUSIVE Q&A: Chris Pook on the Grand Prix of America in New Jersey

EXCLUSIVE Q&A: Chris Pook on the Grand Prix of America in New Jersey

At the start of December, the FIA released the final version of the 2014 Formula 1 calendar with the planned Grand Prix of America at Port Imperial in New Jersey dropping off the schedule. Chris Pook joined the project as special assistant to promoter Leo Hindery in May. The founder of the Toyota Grand Prix of Long Beach has a wealth of knowledge about setting up and running high-profile street races and is now integral to the Grand Prix of America project. RACER spoke to him about progress on the race, his confidence it will happen in 2015 and why it was bumped from next year’s F1 calendar.

RACER: The news emerged recently that the Grand Prix of America wouldn’t be going ahead in 2014 as planned. The statement issued talked about “financial restructuring,” which has been widely interpreted to mean that it is a fundamentally a problem of finance. Could you explain what the situation is?

CP: First of all, this is an extremely complicated temporary circuit, by far the most complicated temporary circuit that I have ever seen. It involves two different cities two towns, if you will, plus a private sector landowner Roseland Property Company. Then you have to deal with the environmental issues with the Hudson River because you are using a portion of that to mount platforms for seating.

So it is very complicated to put together and therefore it is very complicated to fund. The challenge that Mr.. Hindery has had is moving forward with this process of getting it to a point where it is fundable. He is now at that point. The problem with that is that it just eats up time. You have to post your race date with certainty with the FIA and you cannot miss that date, so rather than put themselves in a situation where they would be running at 150mph to get to the 2014 date, the sensible thing to do, bearing in mind the importance of this race, was to step back and say, “Let’s do it in 2015.”

There have been lots of bullets fired at Mr. Hindery from various members of the press. Unfortunately, they have not taken the time to stop and understand the complexity of the project. They heaved a rock at him, but not thought it through.

Where it stands right now is that everybody agrees that this is a very important race for the Formula 1 calendar and for the Formula 1 teams. It’s the largest entertainment market in the world. It will be an enormous success, but you have got to do it right because the standards and expectations in that market are very, very high.

So the project is now fundable and the majority of these “stones” have been turned over and now you know what the financial requirements are. How much more money needs to be found compared to the projections?

CP: We haven’t gone over the projections as quantified in last April/May, but they were projections. They have now been qualified and we are still within the original budget. This is not an inexpensive venue to put together.

It sounds as though a 2014 date was achievable if going at 150mph, as you put it. So does that give us reason to be confident about 2015?

CP: It is really silly to rush these things. We are all much more comfortable for ’15 and that gives us breathing room to complete the financial restructuring. And we can do it all within a sensible operational timeframe.

You joined the project earlier this year and have a wealth of street circuit experience to fall back on. You joining the project was presumably to ensure that the scale of the challenge was understood and certain areas weren’t left neglected?

CP: The best way to phrase it is how Mr. Ecclestone phrased it back in Montreal [in June] when he was speaking to the principals behind the race. He said: “Pook has made more mistakes in his career of temporary circuits than you have ever thought about making!”

To clarify the situation with the different authorities, is this all resolved? Do you have the necessary cooperation from the various different areas of government to ensure things can go ahead?

What is the financial health of the project? Is the process of bringing in the finance to make it happen still ongoing?

CP: That is not my department, but there are some very qualified people working on it, an internationally-known banker is working on it and I am told it is moving forward. We are in good shape 18 months out from the race operationally. I can only speak for that issue, it’s not for me to speak for all the other [financial] stuff.

How is progress with the circuit

CP: That is actually going ahead quite well. There has been a lot of work done, a lot of paving done. All of the engineering is done for that, the drawings are all ready to go, the contract is in place, everybody knows what they have got to do and when they have got to do it. That’s all been done very well. [Hermann] Tilke has done a good job of the design. The top contractors are already in place and some paving work has already been done.

Is most of this work scheduled for the middle of next year?

CP: Yes. It would be silly to battle the winter elements of the North East United States to build the circuit. You are better to wait for the spring and the summer.

How much of the track surface work is done?

The base infrastructure work for about 35-40 percent of the circuit is done. More importantly, the engineering has been done, the plans, construction drawings and all that stuff.

So the schedule is for that to be finished in time for the final inspection three months before the race?

CP: Absolutely. They have got the whole summer of 2014 to do that. 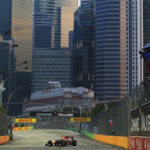 How difficult is this project engineering-wise? For any new F1 track there are always people who question whether building this track to F1 standards is possible

This is the first temporary circuit that Tilke has done. It has been a bit of a learning curve for them but they are very capable. All of the stuff is pretty logical. This is not rocket science, it’s being able to see what needs to be done.

It’s not like building a permanent circuit. As you transfer the streets in normal conditions into a race circuit, you have to recognize that while you are doing that, the streets, the people, the cities have to be able to go about their normal, everyday business.

You have vast experience of street circuits. Is it an achievable ambition for this track to stand shoulder-to-shoulder with the great temporary circuits in the world?

CP: That’s the goal. The bar is set very high by the standards of Singapore, Monte Carlo. You have got to match them. And Melbourne as well, although it’s a little bit different as it’s in a park, so it’s a little bit more like Montreal. But Singapore is an absolute street circuit, as is Monaco, so that’s the challenge.

What is the size of the organization at this time?

CP: From a race management point of view there are four people full-time on it right now. And there are a host of other consultants and engineers, I don’t know exactly how many there are. But behind-the-scenes there are probably 25-30 people. You have Tilke staff, the construction engineering staff, the contractor staff. You have a lot of people with their nose to the grindstone.

The race was originally scheduled for June. So is June 2015 the target you are working to?

CP: I believe that is the plan, but that is something outside of my brief and decided by Mr. Ecclestone and the FIA.

Bernie Ecclestone was quoted saying he expected the race would happen in 2015. He wouldn’t put his name to a project that he didn’t have at least some expectation of happening, which suggests that any financial obligations up to now have been met. Should that give everyone confidence that the project, while delayed, is going to happen?

Both of the mayors in Weehawken [Richard F. Turner] and West New York [Felix Roque] want to see it happen. And Roseland wants to see it happen. Hopefully and presumably, the Formula 1 fans throughout North America and the world want to see this happen. Everybody wants to see this happen, it’s just a question of putting the nuts and bolts together.