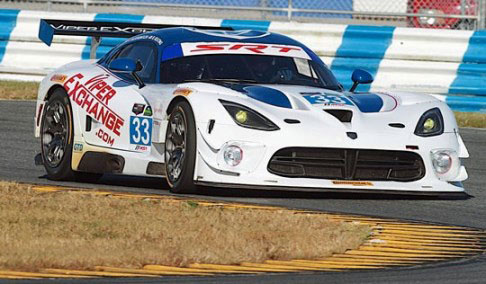 Keating and Jeroen Bleekemolen will be the only full-season GT Daytona class Viper competitors in the debuting IMSA TUDOR SportsCar Championship next year but will have the support of Sebastiaan Bleekemolen and 2005 overall winning co-driver Emmanuel Collard for the season-opening Rolex 24 at Daytona, Jan. 25-26.

“I feel really good about the program,” said Keating, a veteran Viper competitor who is also the principal of top Viper dealer ViperExchange.com. “It was interesting, we weren’t the quickest ones in testing at Sebring and Daytona in November, but it is a brand-new car, chassis No. 1 of a brand-new car, and to go four days with no problems at all was really impressive. The car ran flawlessly then and for two more days now at Daytona.”

ViperExchange.com was the only GTD team testing at Daytona this week and unofficial lap times were comparable to last month’s test session. 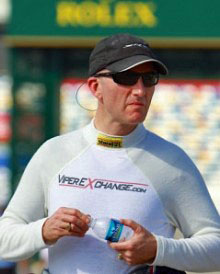 “We recognize that the reason why our lap times weren’t that quick is that we just don’t have the top speed as some of the other cars,” said Keating (LEFT). “It’s a big car to push through the air, but it is an extremely well-run team and the car is so much more car than any other Viper I have raced.”

Keating has raced and won in IMSA and ALMS competition in Porsche GT3 Cup cars the last few seasons but the new IMSA TUDOR GTD division gave him the chance to return to his racing roots in top-tier style.

“I am excited to be back in something I sell, something I am used to, and all of my championships have been won in a Viper in Viper Cup or the Viper Racing League,” Keating said. “This car is just something special, it really feels good, it is reliable and consistent and that makes everybody excited about it.”

Jeroen Bleekemolen, who participated in last month’s Sebring and Daytona testing in preparation for his 2014 GTD championship bid with Keating, was racing in Abu Dhabi this week. His older brother Sebastiaan capably stepped in at Daytona as he readied for his Rolex 24 debut and took his first laps around the 3.56-mile road course Tuesday.

“I think the first time that I drove here in the U.S. was around four years ago and I did Laguna Seca, Petit Le Mans and Sebring,” Sebastiaan Bleekemolen said. “The first morning was my first time in this car, my first time at Daytona and the first time on the high banking.  It was a really nice experience.”

Racing brothers from Holland, both Jeroen, 32, and Sebastiaan, 35, bring extensive sports car racing resumes to Keating and the ViperExchange.com team.  This included early career experience in Vipers in FIA GT and Jeroen’s ALMS GTC driver championship this year with Cooper MacNeil that included Sebastiaan joining the team for the title-clinching race at Petit Le Mans in October.

The Bleekemolens also co-drove to a GTC victory at Laguna Seca in 2010 and also helped Tim Pappas and Black Swan Racing win that year’s GTC title with a second-place finish at Petit.

“We have raced with and against each other many times,” the younger Bleekemolen said about his brother. “Winning championships at Petit Le Mans and at Laguna Seca with him were highlights. We have never been in the same car at Daytona, so that should be fun.”

Another competitive addition to the No. 33 ViperExchange.com lineup is French sports car veteran Collard, part of 2005’s overall winning team that was run by Riley Technologies. Riley, led by owner and principal Bill Riley, built the cars and runs the No. 33 GTD program in addition to the two-car GTLM Viper team.

“It is a very good opportunity for me to come back with Bill Riley and this new program with the Viper,” Collard said. “In the past, we have had good success together, especially in 2005 when we won at Daytona.”

While Riley and his organization will bring some familiarity, the Viper GT3-R at Daytona will be an entirely new experience for Collard.

“To be honest, I have never driven a front-engine car at Daytona,” Collard said. “It will be the first time as I drove nearly my full career with Porsche with the engine in the back, but it will be the same — a steering wheel, three pedals and four wheels, it should be OK!” 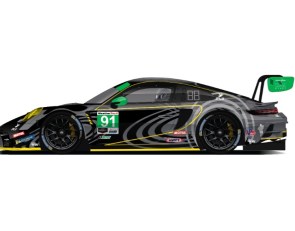